Among us blockheads server idea

Welcome to among us!
The server will work like the game as closely as possible.
We have rules to make the game fun for everyone.

There will be a poll on the op of the thread on the forums. Vote to have a chance to be an imposter! Every Tuesday I will ask if anyone has any guesses. Every Wednesday we will have a poll and I will confirm or deny. If you are killed please don’t tell who the imposter is or you will be banned until the next week.

original op: Ok so I have enough money to fund it and I had an idea

Instead of getting ejected I would just either confirm or deny

For getting killed the imposter would receive one free titanium sword

So what do y’all think?

I like the idea, though I’m not super sure about the logistics.

With a smaller sized group it is unlikely that many people will be on at the same time that often over the course of a week, turning it into a random guessing game.

I this shorter rounds where everybody is online for the duration of the round would be more enjoyable, considering more activity and the opportunity to find regenerating bodies… oh boy, it’s already starting to form in my head

It sounds good!
I like the game among us, if we tried to create a server like that I think it would be fun.

love how unique it is, never seen anybody doing it before, I think it will be fun

You should make it no rip so no one cheats

This a nice concept. Very cool - shame our social media is shut down. I loved sharing new ideas from players on there.

Pretty cool server idea, although in my opinion would work better with the flow of more active players on blockheads…

shorter rounds where everybody is online for the duration of the round would be more enjoyable, considering more activity and the opportunity to find regenerating bodies…

What if you do a custom server then set it to one hit kill, make it so the spawn doors are one way only and tasks could be like make a coffee or stuff like that and disallow the usage of tc?

Edit: and have a discord with preset dates on it so everyone can plan to be on at the same time allow for an actual game to happen in real time

Edit: I decided to start the poll now the server has been made with 2 month’s credit thank you again @Bibliophile I will open it asap probably tonight

The server is now open! The first round will start 10/18/2020 cst I will post the tasks that day don’t forget to vote and you can come on and get supplies ready I decided to make it searchable instead of private

I really doubt that I will play (sorry for voting) but seems fun.

I voted, my good fellow.
I played Among Us for the first time yesterday, so you’re going to have to give me a run-through on how actually to play.

Most of the games I did were just people smashing the emergency discussion button over and over until the imposter won for no reason. I never got to do a single task and still don’t know how.

I will help you 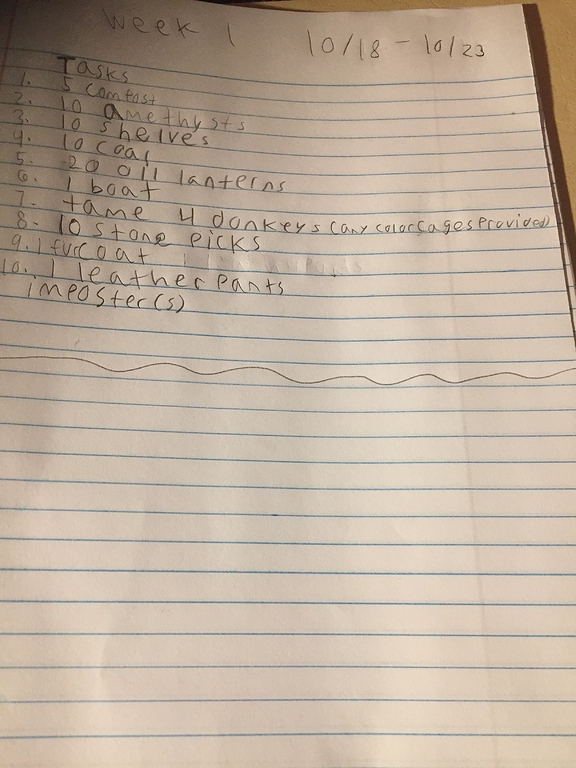 I will put them on signs at spawn in the morning have fun! Put the items in your safe at spawn