Apple recently said this at their March keynote:

Apple Card is a new kind of credit card designed by Apple, and built on the principles of simplicity, transparency, and privacy.

Apple Card completely rethinks everything about the credit card. It represents all the things Apple stands for. … And it’s the first card that actually encourages you to pay less interest. You can buy things effortlessly, with just your iPhone. Or use the Apple‑designed titanium card anywhere in the world.

What is the Apple Card?

The Apple Card is an Apple-branded credit card from MasterCard. Unlike the current Barclaycard Visa with Apple Rewards, which is a partner card, the Apple Card is owned and operated by Apple.

When will it be available?

Apple says the Apple Card will be available this summer.

How do I apply for the Apple Card?

With your iPhone, of course. Applications go through Apple Pay in the Wallet app, which means you’ll probably be periodically bothered to apply if you don’t already have one. Just remember that it’s a credit card, so the application will probably still ask for your work history, social security number, etc.

So I have to have an iPhone?

That’s right. The card information is stored in the Wallet app, and you need an iPhone to get it.

Will my old iPhone work?

Probably. Any iPhone that supports Apple Pay and the Wallet app will work, so unless you have an iPhone 5s, you’re good. 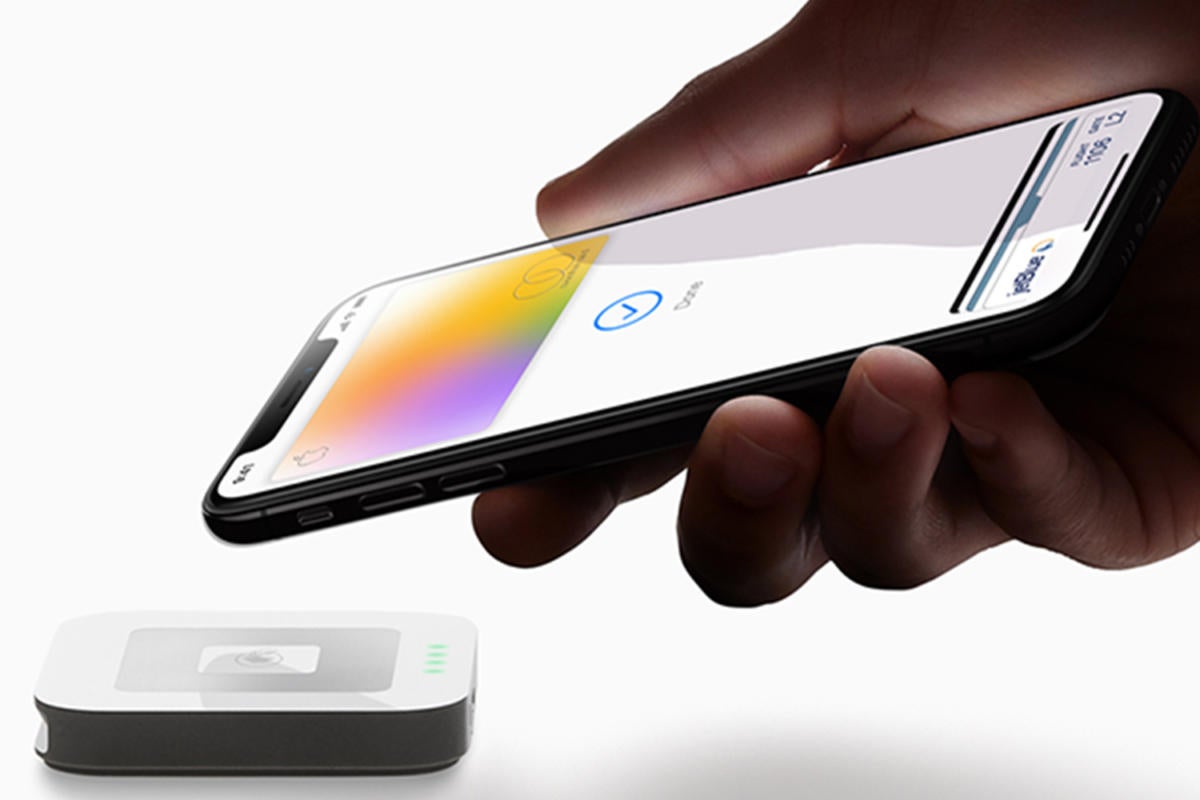 The Apple Card can be used anywhere, but the best benefits are when purchases are made using Apple Pay.

What about the iPad?

You can’t download the Wallet app on the iPad, so there’s no way to apply, and it doesn’t have NFC so you can’t use it in stores. You will be able to use it for Apple Store app and online Apple Pay if you sign up on your iPhone, however.

Can I get a physical card or is it virtual only?

Apple is also offering a laser-etched titanium card for those times when Apple Pay isn’t available. In true Apple fashion, the card is minimal and gorgeous, with no numbers, expiration date, or CVV code to muck it up.

What if I need my card number or expiration date?

You’ll find that information in the Wallet app.

What if I lose my Apple Card?

Apple will provide a button in the Wallet app so you can freeze your card and order a new one.

What bank is issuing the card?

Apple has partnered with Goldman Sachs. Of note, this is the bank’s first consumer credit card.

How quickly will I be approved?

Apple says approval takes minutes, so the whole process probably takes about as long as it would when applying for a store card. 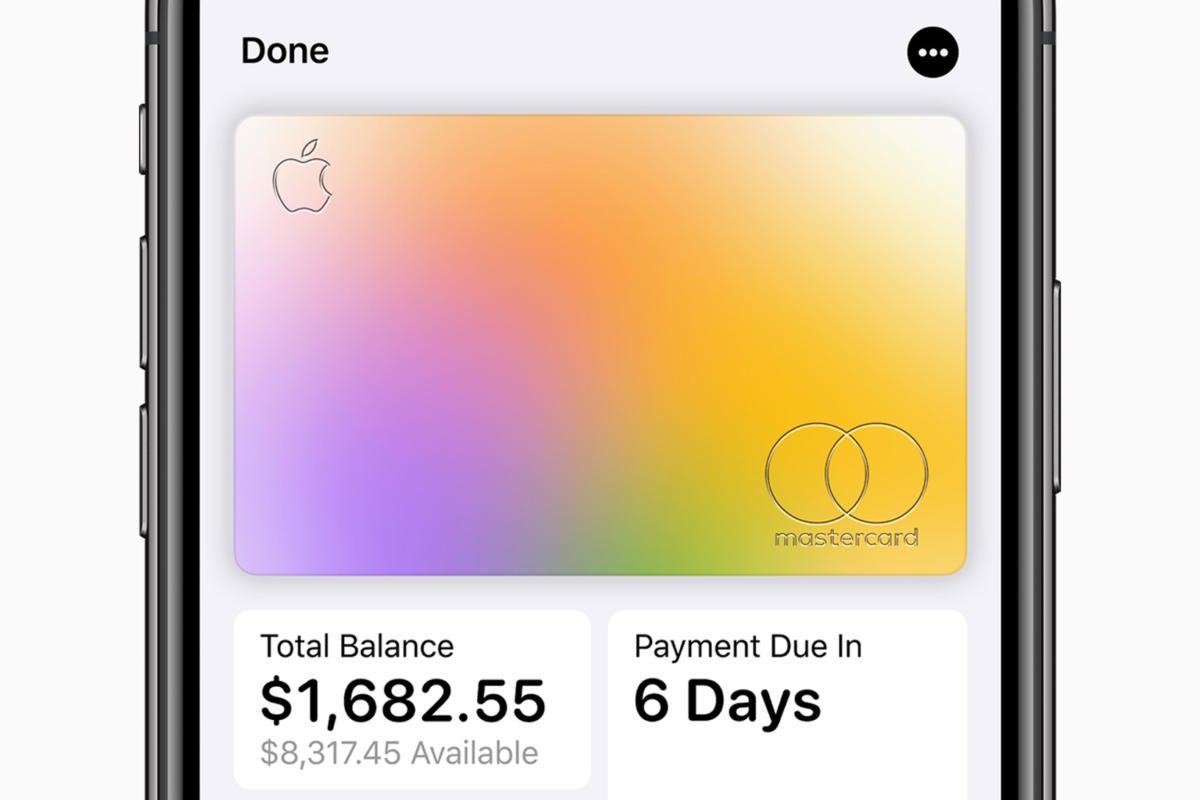 Your balance and due date are front and center when you launch the Apple Card tab inside the Wallet app.

When can I start using my Apple Card?

Since all of your card information is stored on your phone, you’ll be able to start using your new card as soon as you’re approved.

How do I make purchases?

Just like you would with any other card. When you buy something at a store that accepts Apple Pay you’ll be able to hold your phone near the contactless reader or double-click the home or power button (depending on your iPhone model) to quickly bring up the pay screen, and authenticate using Touch ID or Face ID.

Can I use the Apple Card with my Apple Watch?

Of course. Since it’s a regular credit card, it’ll work the same way as any other card.

Can I schedule payments for things like recurring bills and utilities?

Since you’ll have a standard number, expiration date, and CVV in the Wallet app, you’ll just need to input that information in the payment page for whatever bill you want to add.

Apple didn’t mention anything about sign-up bonuses during the Apple Card announcement, but that doesn’t mean there won’t be sporadic offers to entice new users.

Is there a rewards program?

Yup! Apple’s rewards program is called Daily Cash. Rather than a complicated points system, it simply pays you cash back for every purchase you make. 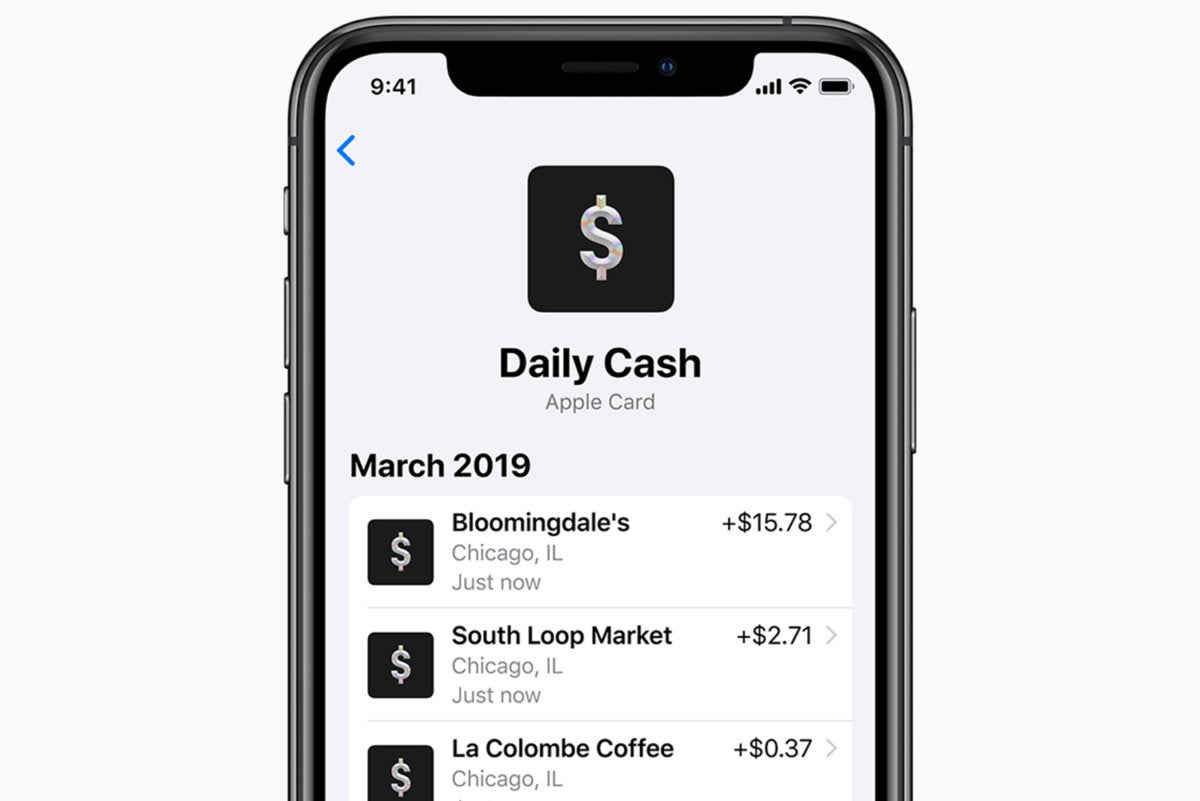 Apple Card rewards are tallied each day and delivered via a cash card.

Is there a limit to how much Daily Cash I can get?

Nope, Apple doesn’t set a ceiling on how much Daily Cash you can earn, but the amount you earn is based on how much you spend, and there is a limit on that.

Can I spend my Daily Cash immediately?

That’s why it’s called Daily Cash. Instead of waiting a month or a year to get a rewards check, anything you’ve earned will be automatically deposited into your Wallet in the form of an Apple Pay Cash card. From there, you’ll be able to transfer it to your bank account, send money to a friend, or just use it to buy something at any store that accepts Apple Pay.

What if I need to return something that I’ve already received a reward for?

That’s not entirely clear yet, but presumably Apple will either charge your card the amount that needs to be reversed or deduct it from your Daily Cash balance.

Where can I see a record my transactions?

Everything that you need to see will be right inside the Wallet app, including payment due date, transaction and payment histories, and spending analyzers. Apple will also color-code spending categories so it’s “easy to spot trends in your spending. … See a lot of orange? That’s things like lunch and coffee. Green? Must be those tickets to Miami.”

Are there any annual fees?

Are there any late fees?

What about foreign transaction fees?

Again, nope. Apple says there are no fees at all for the Apple Card, even if you accidentally go over your spending limit.

Apple’s smart spending analyzer will tell you how much interest you’ll owe based on your payment.

What are the interest rates?

Apple boasted that their interest rates are among the lowest in the industry, but they’re not exactly friendly. On the Apple Card site, Apple says the variable APRs range from 13.24 percent to 24.24 percent as of March 2019, so that could change by the time the card launches.

What about cash advances?

I don’t know what Apple’s terms for cash advances will be, but generally they carry extremely high interest rates.

How can I see my interest rate and penalties?

Before you submit your payment, Apple will show a smart payment suggestion wheel that lets you know how much interest will accrue based on how much you pay.

Is the Barclaycard Visa with Apple Rewards going away?

It’s unclear whether Apple will continue to offer or support the Barclaycard Visa for Apple Store purchases after the Apple Card launches.

Will Apple see all of my transactions?

Apple says transaction history and spending summaries are all generated on your iPhone, so Apple won’t be able to see any of your card data.

What about Goldman Sachs?

Since they’re the ones lending you money and securing each transaction, Goldman Sachs will have a record of every purchase and payment you make with your Apple Card.

Will Goldman Sachs sell my data?

Apple says Goldman Sachs has agreed to “never share or sell your data to third parties for marketing or advertising.” 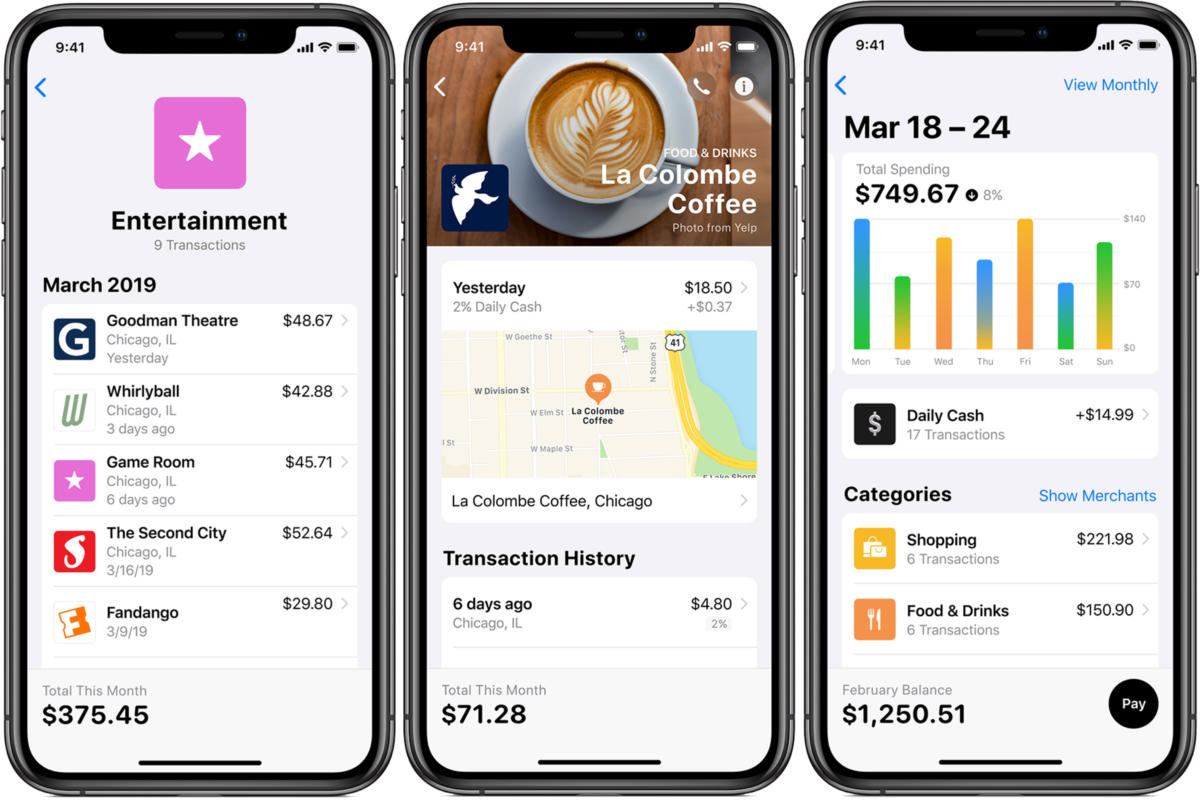 Apple makes it easy to see your transactions and spending inside the Wallet app.

Apple has baked Apple Card support right into Messages via Business Chat. Instead of calling an automated service, however, you’ll simply send a text and a person will respond 24 hours a day, seven days a week.

When will my bill be due?

Instead of a flexible due date, Apple is making all card payments due on the last day of the month, regardless of when you applied.

How do I make a payment?

Can I make more than one payment a month?

Yes, in addition to standard monthly payments, Apple will also let you set up “weekly or biweekly payments to match when you get paid.”

What else should I know?

That is just about everything you need to know.

Ugh! So many posts have been lost!

Yeah, that I’m too lazy to repost them.

Have a look at the physical Apple Card: https://m.youtube.com/watch?v=JLE228ZuGGA

Employees are starting to get the Apple Card!

Mobile leaker Ben Geskin shared images on Twitter of the consumer packaging of the new Apple credit card coming from Apple. Geskin reports some Apple employees are already starting to get the card which was announced in March. Some Apple employees...

Apple Card is rolling out today to a limited number of customers.

Apple Card got its first group of public test users today. A limited number of customers who signed up on Apple's website to be notified about the release of Apple Card are now able to apply for the card in their Wallet app as well as order a...


Apple has also shared a series of videos explaining how to use Apple Card.

As part of Apple Card's "preview rollout" today, Apple has posted a series of videos to its YouTube channel explaining how to set up and use Apple Card on iPhone. The 10 videos cover a range of topics, including the following: How to apply for Apple...

Apple Card is now available for everybody!

the problem I have whit the apple card is not only can apple view your transaction history, but you can also not buy any sort of concurrency with it.

It’s only for the purpose of finding where you made your purchases in case you don’t remember a certain purchase. Not a single person at Apple will view your transaction history.

It’s the same as with your bank.The apple card is even issued by Mastercard.
BTW what do you mean by concurrency tho?

If you don’t trust Apple with your finances don’t get one. Technically, it’s like getting a store credit card or one from your bank, but how you feel about the brand is important to your sense of security, so do what feels right.

how you feel about the brand is important to your sense of security, so do what feels right.

Yeah, you shouldn’t just get the card for how convenient it is. Do what you feel is right.

Don’t be rude. They’re all convenient. Whoever you get your card through it’s probably from one of the major card providers, VISA, Mastercard, American Express, etc. and so long as it’s VISA or MC they’re all the same. They can all be used with stuff like Apple Pay and similar. Any differences are pretty minor.

Was it something I said?

Apple does not let you buy crypto currencies like bitcoin with there card.

I don’t think Samsung pay can either…But it was rumored to have it in the future.
I think there are other e-wallet apps available for download that let you buy cryptocurrencies.

Interesting that Goldman Sacks, the bank behind the Apple card, is being investigated for illegal credit approval gender bias at the moment. I used to work for a software company that specialised in credit approval systems, and while gender was recorded it had no part in the decision-making processes of the software. This is a big no-no. 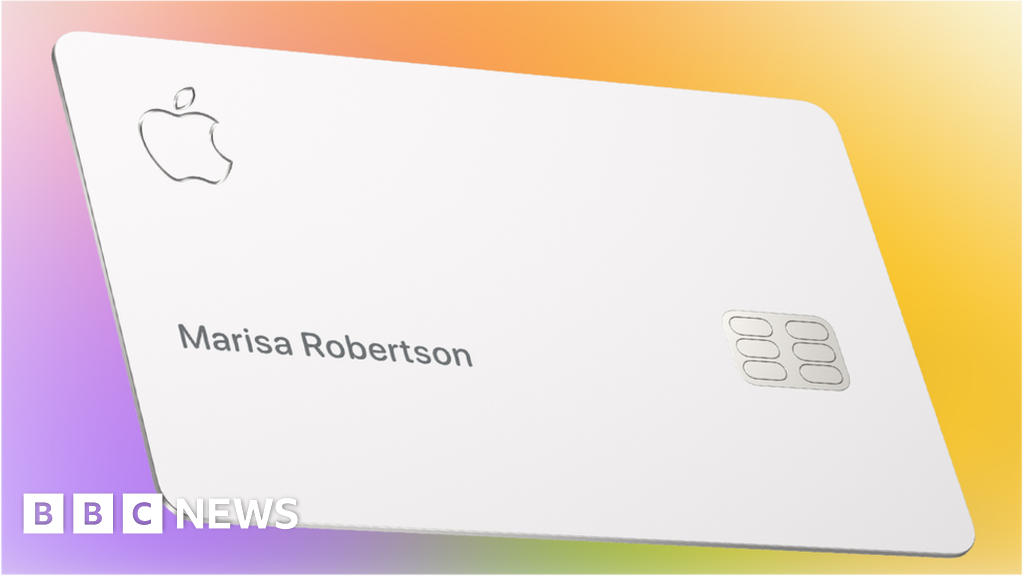 Goldman Sachs bank, which operates Apple Card, discriminates between men and women, it is claimed.

If you have an Apple Card, make sure to be wary of this!

This should’ve happened a year ago. 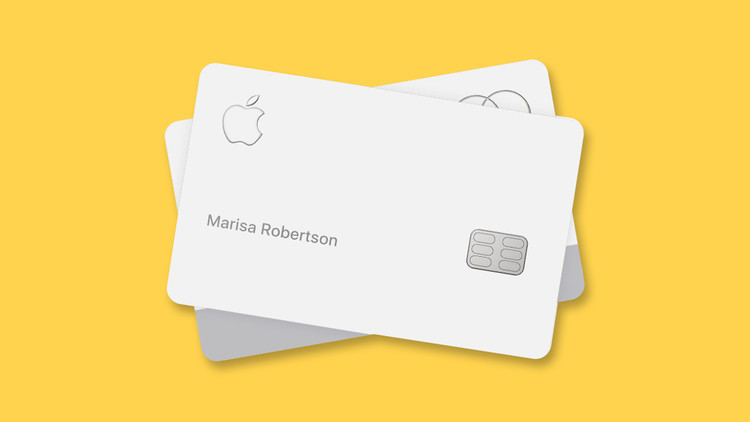 Apple Card is starting to show up on Equifax credit reports, but not yet for all users, according to a Reddit discussion today.