It really depends on a number of factors.

It is not, if it is dead it would be out of the AppStore or Play Store

I see you everywhere

Yes Blockheads is dead. Meaning that it wasn’t as alive as it was since 4 years. The blockheads is facing the great depression. People have quit blockheads because of the 1.7 Update. It’s nothing but a fact, I know it’s hard to hear.

I will be creating a server in the next few weeks that will do it’s part in reviving blockheads.

I completely agree with you @TheFoil and no one here is ready to accept the real fact.

I wouldn’t say it was the 1.7 update that killed the game. I would say it’s the update drought since then.

People have quit blockheads because of the 1.7 Update

People have also quit the blockheads because they sneezed. This is objectively misleading. The selected date is the 1.7 release. Blockheads has been steadily declining for a long time. 1.7 didn’t kill it. 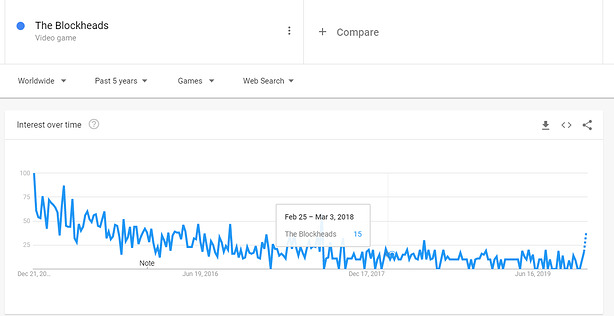 Believe or not 1.7 also played major role in it.

I agree with you @Hdjensofjfnen I honestly want more updates to the game like Minecraft in the old days where updates were frequent and that’s how it became very popular because the game developers put a lot of stuff every time so gamers that day follow Minecraft and see where it will lead. And up to that point they enjoyed the gist of the game.

This is objectively misleading.

In all seriousness, I wish it was…

He meant it was statistically misleading on the 1.7 part because it was declining much earlier, meaning it wasn’t misleading that the game is on decline but rather that 1.7 wasn’t the cause.

Tbh blockheads started dying after 1.7 because less updates where coming out. People like games that update a lot and blockheads doesn’t do much small updates

Well, as I’m more of a single player person, the definition of the game being alive is the app still being supported for me.

Blockheads is dying. My yearn now (to the game) accumulated mere essential interest since… The once zeal evenly enclosed keen is essentially lacerated; I no longer have much interest in the game… Scared forever. It is difficult to get back to the game at the moment. Maybe distractions. Moreover, priorities.

But notice that has nothing to do with the actual blockheads activity, that’s just people who serach blockheads on google

It’s definitely not dead. But it’s not as popular as it once was.

(Sorry in advance for the long message)

Personally I didn’t like the update, ngl I did participate in tc hacking and it was a lot of fun, finding glitches and things to share with friends, and I could teleport everywhere instead of waiting for my character to get there, and crafting was easy, but I still had a type of work that I had to do (working around the fixes for tc hacks and sometimes the glitch would be a grind getting tc) but the major part that put me off, was the fact that in 1.7 I had to re discover every item in game, and I had no tc to speed that up, it became hours of grinding even to buy things that I’ve bought before for a house or something, but more difficult, I couldn’t buy it without making one first, so I drifted from the game, I just started playing again today but I’m not even interested in finding all the stuff anymore, I just use it to practice some coding. Maybe a little playing but it’s too much grinding…

One thing I think would help, is to bring back the tc glitches, so we can get free tc but on purpose, just giving it out wouldn’t work because it’s not as fun as trying to figure it out, and keep servers paid for. I’d suggest to make an option to make a subscription for a month of credit, where it auto renews, but keep the single pay option open. If they continually have to pay for it through single payments then one month they might feel like it so they won’t buy it, but they might want to play later that month but they remember they didn’t buy it on purpose and that turns them away, with a subscription it would stay open continually and they won’t even think of undoing it because it’s only like 3.99 a month so that’s not a lot, and if they do they would have to go through more work. So there’s a possibility of a continual income. I don’t know how much you make on tc so making it free through glitches again might not be the best idea if y’all make a decent amount. But I don’t see many people with a ton of time crystals paid anyway so I don’t expect it to be a lot.

(Summery: I think if they made the server payments a monthly subscription they would keep more long lasting customers and if they re enabled the glitches for tc they would get more players. Bc free tc would be great but it would take some of the fun out of it. So basically make tc free but secretly)

(Edit: also it would be awesome and fun to be able to add friends so you can see when they are online and join the same server as them as long as it is public. And make a chat with the friends list so you can send invite links or something to non public servers)

(Edit 2: also the trade signs are annoying for anyone but the admins/owner of a server. I see the point 100% but people abuse them and place them over miles of in game area (not literally). And I’ve had to walk over 10 straight minutes (literally) to find the end where I can actually build and at that point I’m so far away from trade portals or anything that I need tc to teleport to them or make my own. Idk what can be done bc ptsigns do help a lot of nice builds from grievers. Maybe make it only the first 100 blocks from spawn are protected for free (or say a spawn protection sign that costs more gold or something) and then only about 5 areas available to protect. With limitations on it like if the building is so many blocks high it has to have a way through it via wooden doors or something that is under a specific block amount of increase from the original walking distance (so people can’t build really tall towers and protect them as 1 building)