After spending a ton of time in a terribly cold custom expert mode server, I have learned a lot about how to avoid the cold and what you can do to keep warm. The other guides I’ve read seem pretty out of date so hopefully this will help. I’m also not going to go over the very plainly obvious notes such as “a fur coat will keep you warm”. That’s for beginners and I’m interested in helping players who are dealing with bad conditions who may not have known the nuances of heating techniques. This isn’t a comprehensive guide but I was really surprised at how many other people didn’t know these things. So I’ve decided to create this guide with pictures to help everyone survive in the worst winters!

Tip 1: Use the right materials.
When it comes to fighting cold, not all materials are created equally. Materials like wood, glass, and gem blocks will definitely let the cold right inside. They might provide a little relief but we’re talking about extreme situations- don’t rely on what you can see through. Some items and materials make your situation even colder. Portals will make your area colder and some even say diamonds also carry the winter with it. I haven’t tested it out, but I suspect some materials like gem blocks contract more cold. AVOID THEM! 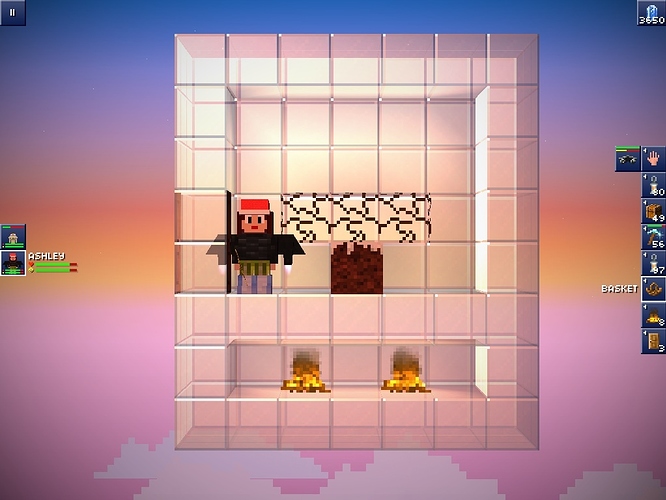 Tip 2: Wind will blow through diagonal corners.
You might think you’re safe when you can’t get through but the wind is much thinner than you are. When blocks are placed diagonally from each other (with no elbow block) the wind and snow can blow right through. The solution is to plug those corners up! Don’t make a shelter with any exposed corners. I’m going to repeat this for emphasis- DON’T LEAVE ANY OPEN CORNERS. Even ONE will let the cold in and you’ll die. CLOSE IT TIGHT. 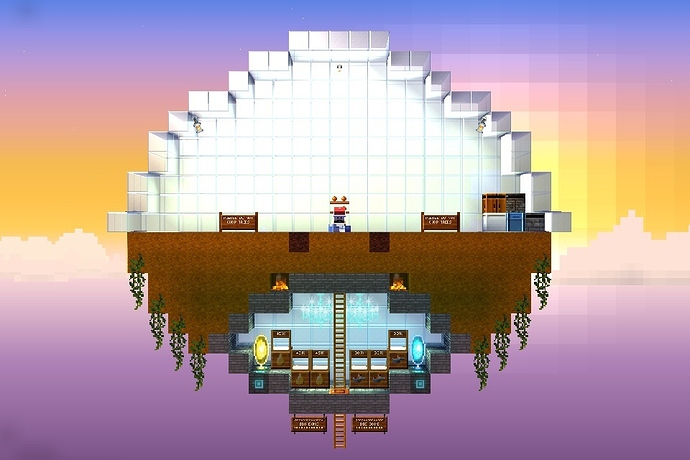 Tip 3: A back-wall doesn’t mean you’re “inside”.
I know it’s tempting to think that once you are behind a back-wall, you’re safe. That might be true on a normal server but not in a winter wonderland. If you were inside a space that’s completely surrounded by diagonally placed blocks and a solid back-wall- you may as well be standing outside. It’s true that the farther away from the edges you are, the warmer you’ll be. But don’t let a back-wall fool you into thinking you have shelter from the cold. 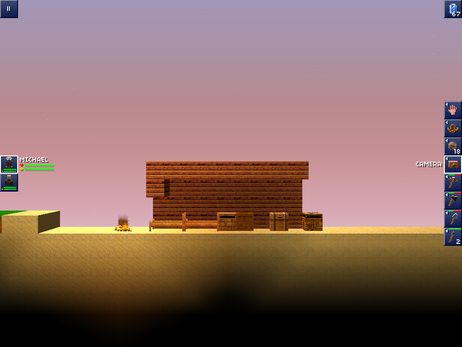 Tip 4: Stay away from exposure.
This might seem obvious but it’s often a huge issue for players trying to retrieve things they lost when they died of cold or when they are trying to build a shelter in exposed areas. For example, I’ve seen players go over and over to the same place where they died to pick up their lost items just to be killed again. When you go to a spot which is exposed, try to reach the spot by traveling UNDER the exposed area. Some shelter is better than none. But if that’s not possible, limit your exposure by lining up a retreat command before your blockhead reaches the intended spot. That means when you’re still far away, tap the exposed spot you want (for example to place something or to pick something up) and then set up another command to immediately retreat to a nearby safe area. Don’t waste any time in that exposed area than you have to. Do it and RUN. If you have food for energy, don’t use it up before you hit the exposed area. Use your energy boost right before, during, and after the exposed time. So if you are trying to build a shelter, place one block, then RUN BACK. Wait to warm up. Repeat. It might seem tedious but it’s much faster than dying over and over. 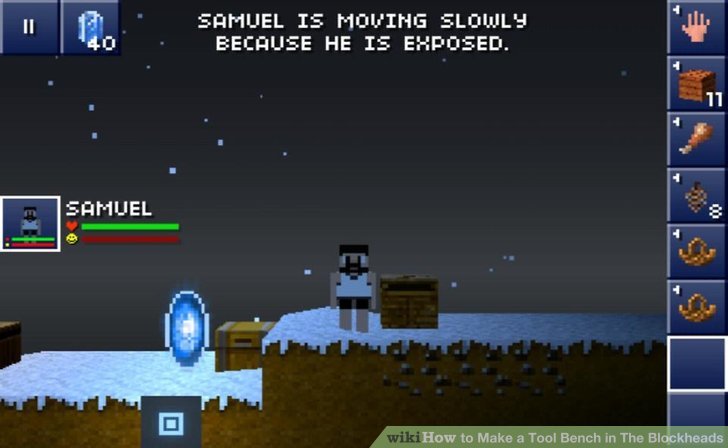 (I’ll try to get a better picture later)

Here’s another way to apply this knowledge; when you’re building your shelter, don’t try to walk across the top to place blocks in a row, manage to get your blockhead under the row you are building and place them increasingly over your head.

Tip 5: Seasons matter.
Pay attention. In some areas, the current season can be the difference between walking around without a coat and exploring and instant death. You can find other posts which will help you identify what season it is. Research it. Memorize it. Obey it. I should also note that “snow” is not a good indicator of what season it is on very cold servers. Some will have it set to snow all year round- even during the “summer”. So look to the trees to tell you what season is willing to let you frolic and when to hide back inside. 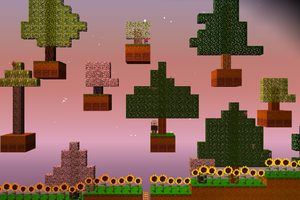 Tip 6: Chilies are your friends
Chilies grow in warmer climates. If you want yours to grow you’ll have to create a warm enough area for them to thrive (without burning them down). If the area you have isn’t warm enough- you could lose it (it will die) directly after you plant it and you will get nothing in return- a total waste. So be very cautious when you plant them in cold areas. But if you eat them on cold evenings, they will help to warm you up. Be careful of eating too many though- you can still die from over heating.

Tip 7: Torches, Fires, and Kilns
First of all, torches are not that useful against the worst cold. Even 100 will still be spread out too far too have much of an effect. Fires, of course are much more powerful but even though they take up only 1x1 area of space, the heat they generate can be up to 2x2 which means it can burn your trees down even if they are placed directly under a block of dirt. The best solution is the kiln. Not only is it relatively cheap to make using materials from job listings, but it also produces a safe fire and can even be placed under water for melting ice! Of course, furnaces, steam generators, and other fire-oriented benches will also do the trick but they are much more difficult to get/make. Especially if you can’t buy it. 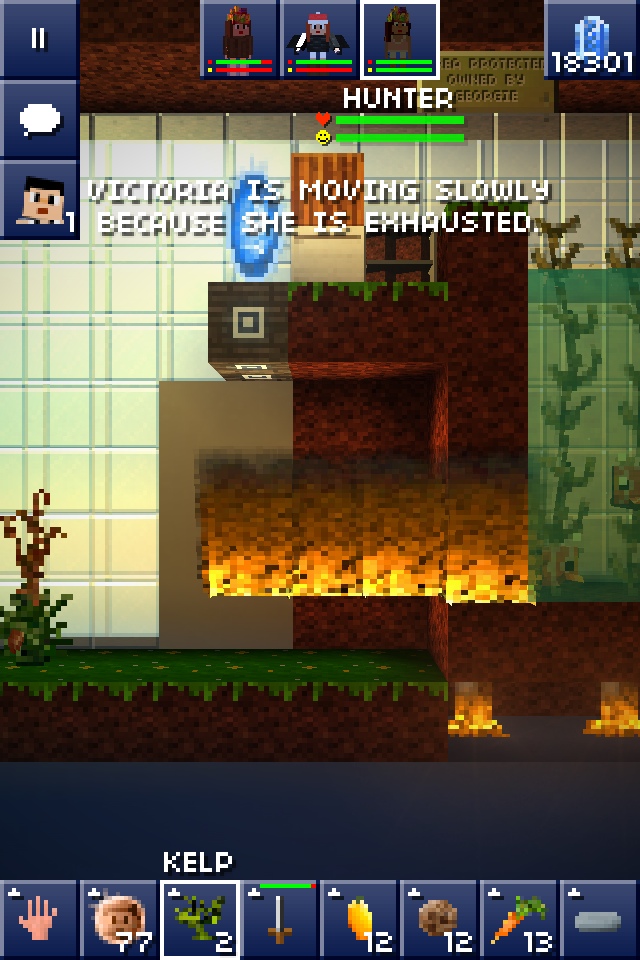 Tip 8: Don’t try to boil a swimming pool with a lighter.
This might seem obvious to some but, again, I keep seeing fairly knowledgeable players not understand this concept. When you are attempting to heat a space, the size of the space matters. Heating a small enclosed area will be much easier than trying to heat a very large space. Logic follows, a small space will get very hot very fast with just a little heat added. So when you are in an expert mode server, don’t make the ceiling to your shelter so high above you and your heat sources! You won’t be able to take advantage of the shelter and your heat if the space you are trying to warm up is too large. Make smaller compartments. When you have the ability to, make doors to get in and out. In the beginning I know spending a bronze ingot per door will feel like a waste, but when it comes to staying warm, it’s worth the investment. 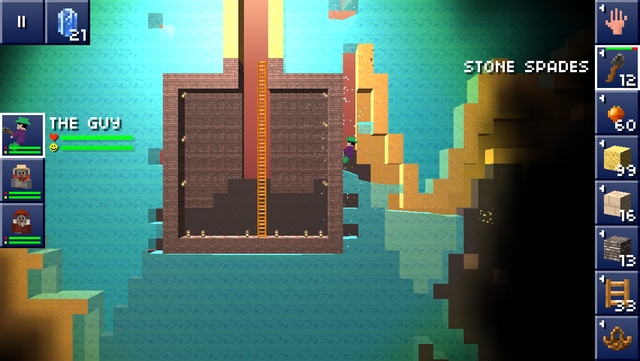 (Again, I think I need to find a better example picture.)

Those are all the tips I can think of for now. I really hope this tip guide helps everyone survive, enjoy playing, and keep warm in blockheads a little bit more!

To add to that; i havent tested this sense 1.6 (i think) but theres a reasonably large difference in heat production between the different levels of furnaces. firey benches will also give off less heat when their fuel is low.

firey benches will also give off less heat when their fuel is low.

I didn’t know that. Cool!

This guide is really impressive, after reading it I immediately felt like joining a cold custom server!

Thank you for so many useful hints