I think dodos of different spceices can cross-breed

ive got 3 iorn, gold and amathist dodos, the amethyst ones keep laying gold ones, im confused!? can they cross-breed?

Iron dodos will lay gold eggs. Are you sure it’s not the iron ones?

Dodo breeding I’m going to presume you’ve read this excellent guide. If not,read it before you proceed! Below are the steps to dodo breeding. 1.Get a sustainable apple farm. Dodo taming needs 3 apples,and much more for maintenance. It’s wise to have a farm dedicated for apples only. 2.Tame a pair of dodos. Taming lets your dodos live as long as they are fed,which means more potential eggs. Taming more than 2 basic dodos is unnecessary. 3.Egg control is important. When you see a egg of … 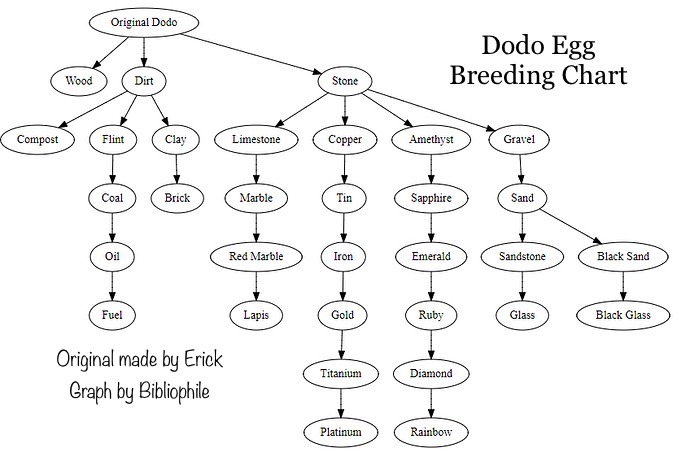 I’m pretty sure there’s no way an Amethyst dodo will ever under any circumstances lay a gold egg.

If you see this happening, check to see if there are any iron dodo’s in the vicinity. It’s more likely that the iron dodo was the source, but it only appeared to come from the amethyst bird.

im getting better ones then they should lay

i have seen this 100 times, i know what im seeing

the health of the dodo will go down when they lay an egg, im sure its the amythist dodo

Merged three posts. If you reply to one person, you can @ any others you also wish to reply to in the same post.

Has anyone else seen such a phenomenon?

As a slight alternative, also try keeping them separated until tamed. Then run a few cycles while separated to ensure that they only produce eggs of their type. Once confirmed, removing the separation so they can breed. Then run about 20 cycles and tally as above.

I’ll try this myself and see what happens.

Living up to your title!

Has anyone else seen such a phenomenon?

Yes I have seen similar and thought everyone knew it lol

Slight flaw in the experiment:

Iron dodos will lay gold eggs sometimes, so I have to remove the iron dodo after they breed to see what the Amethyst dodo produces. Then after that allow them to breed again.

More work than I thought, but now that Hailey has confirmed a similar observation, I must go through with this!

Ok, the experiment is complete and the results are quite shocking!

Here is my report:
I started with 1 Iron egg and 1 Amethyst egg, placed as follows:

I kept them separated until they were hatched and tamed:

What happened next was not unusual. The amethyst dodo laid several amethyst eggs and the iron dodo laid a couple of iron eggs.

But then something amazing and unexpected occurred.
The Iron Dodo laid an Amethyst egg!!

(Picture recreated because I was in such shock that I picked up the egg to make sure it wasn’t some weird lighting trick.)

So, in conclusion… Dodos can indeed cross breed! How did we miss this?
If an Iron Dodo can lay an Amethyst egg, then I have no doubt now that @blockhead_lord observed an Amethyst dodo laying a gold egg. (Which is typically the next highest tier for an iron dodo). Also, I would expect that my iron dodo might eventually lay a sapphire egg.

This was truly surprising, I never realized it was possible. I always thought the dodo evolution chart was pretty much iron-clad

Well, how about that, 3 years after the release of 1.7 and something new is discovered!

This was truly surprising, I never realized it was possible. I always thought the dodo evolution chart was pretty much iron-clad

Well, how about that, 3 years after the release of 1.7 and something new is discovered!

I thought everyone knew this

told yall its true, also i got a plat egg on 11 titanium dodo, im so lucky, try cross-breeding a low dodo with a high teir dodo, it increases the odds of getting the high one

i got a safire egg just now

Excellent. I’ll have to experiment with low tier/high tier dodos.
Right now I have a base with 80 titanium dodos in isolated pens 2 spaces wide. They produce nothing but titanium because of their isolation. It’s a very productive farm but it still doesn’t beat finding a decent vein of titanium underground while wielding a diamond pickaxe…

get like 10 and put them in a 10/2 block area, it helps cause they can all breed together

Yes, but a pen that size significantly increases the chances of a regular dodo appearing in the pen randomly. And then you’re back to square one on the crossbreeding. Skeeve’s system allows for infinite sustainability.

then dont put trees in it

Has anyone experimented with the possibility of donkeys cross breeding in a similar way?