Before I get into what this suggestion is about, I would first like to establish why I think it is worth consideration despite the game being close to its end for new content updates.

If the cloud became unavailable, would we still have our single-player worlds and Mac servers?

Yes, for a certain value of yesness

It would be as though everyone were banned from the cloud. Dave would need to put out an update to remove the cloud options from join and create in the main spinner.

Milla suggested that MajicDave might keep the game around for a while, even after the cloud has died.

I know there are many people (myself included) that have spent many hours, days, months, and even years building things on cloud worlds. It would really be a shame if all that work and all the memories that came with it were completely lost. I think there are ways to keep this from being the fate of everyone’s hard work.

iOS has changed significantly since the beginning of the cloud, and Apple has given app developers new ways to let users interact with their apps. One of those changes is with the Files app.

I first brought up this possibility back in late 2017 (which I believe was the time iOS 11 first came out). The files app was completely new and didn’t do quite as much as it does now.

While it is still true that we cannot access system files, the Files app has changed a bit. Within the past couple of years, I noticed that app developers could let users modify on-device files that their apps use. A couple of examples are Minecraft and TheoTown:

If you look inside these app folders, you’ll notice that you have access to and can change many of the game’s asset files (e.g., audio, textures, images, etc.), and most noteworthy for this suggestion—for Minecraft, you have access to world files: 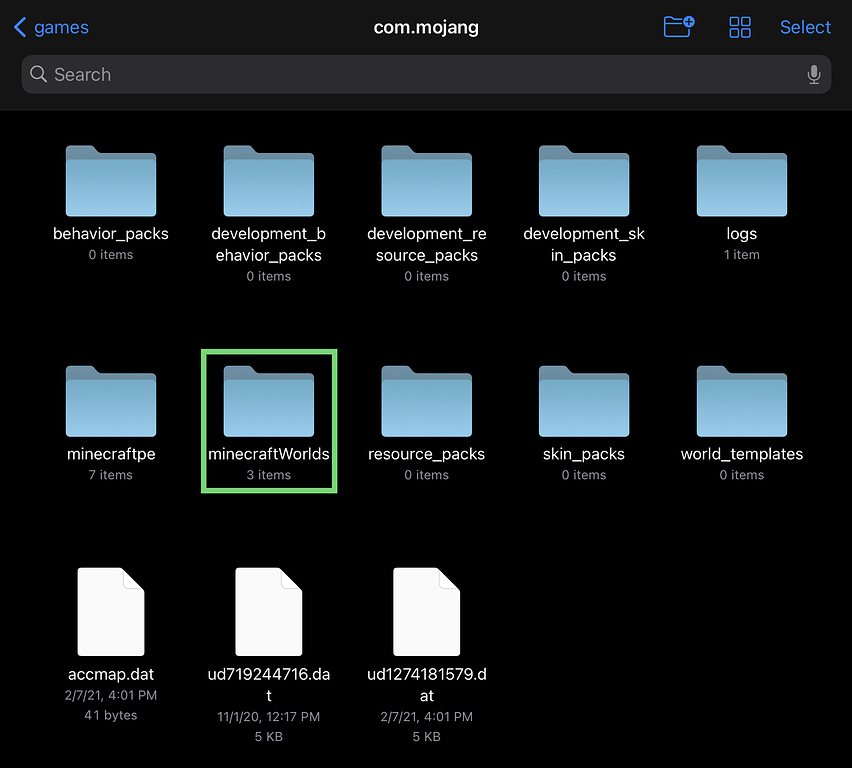 With that in mind, it would be nice to have a similar feature in The Blockheads by having access to an on-device app folder and letting users copy world files to other devices or vice-versa.

If, for some reason, method 1 is either not feasible or is undesirable for some other reason, how about having an option in the create world section to import world files from the Files app? This wouldn’t give users direct access to any files the game uses, but it would still allow users to import worlds from other devices. And there could be an “Export World” button added to the bottom of single-player worlds in the world spinner that would allow users to save that world’s files wherever they choose inside the Files app.

Downloading worlds from the cloud

Once there is a way to import world files to the game, there should be a download button in a world’s settings on the Owner Portal site. This way, nobody will lose any progress, and maybe some owners can keep hosting their worlds, just as a Mac server instead.

Beyond the game’s lifetime

I don’t know what Dave has in mind for The Blockheads long-term, but suppose he decided to release the source code for people who wanted to run the app on their own devices, or think of those who leave the game installed on their devices years after it’s been removed from the App Store, or the Android users that have an APK file. It would be nice to have a convenient way to import and export worlds for those who still want to keep playing The Blockheads even after it loses support.

• Provide a way for users to export single-player world files to either be used on a Mac server or on another device.

• Provide a way for users to import single-player world files from another device.

Benefits of these features:

• Players will be able to easily move worlds between their devices, as well as share them with their friends.

• Cloud server owners won’t inevitably lose the progress of their worlds and will even be able to move them over to a Mac server if they wish to do so.

I really hope Dave gives this suggestion careful consideration because the way I see it right now, many players are going to inevitably lose their worlds when the cloud comes to an end, and that would really be sad for many people.

Thank you for your time.

Fabulously done! I shall certainly show it to him next time he looks at working with Blockheads

He hasn’t completely abandoned development yet? If so, that is great news!

I don’t know. I thought I had been really clear that there are no plans, either way, with respect to Blockheads at this time. You’re a champion at reading things that I haven’t written.

Oh, I thought you said he might look at working with Blockheads again. My bad!

Please don’t confuse technical housekeeping with development. They really aren’t the same thing, and I don’t want to get hopes up about more new content and features coming, after years of quietly putting that idea to bed.