Hi, post your blockheads name, its project right now, suggestions, and anything you’d like to say about your future ideas or past projects!

Project: Farming and tending to trees/crops 60% of the time, mining 25% of the time, and doing other miscellaneous activities 15% of the time (still gotta grab some kelp from the ocean shallows).

Past Projects: Explored my continent and part of a cave. Built and sill use a underground dirt shelter.

Project: Finish castle and build plumbing/pipes and wells through my continenent

Future ideas: get to the center of earth, mine more, farm more.
Past Projects: Filled my fairly large continent with builings and structures. I now have to move across ocean, so far ive built over 25 structures.

Present: im living in a very roomy and somewhat fancy stone castle next to my light house and dock.

Blockhead names:Alexandra, Brittney, and Ross.
Project: Working on farm land.
Future ideas:Finding hidden achievements, starting kelp farm, and making new multi player worlds.
Past projects:all achievements except hidden ones, made a red marble underwater hotel with chandeliers, have awesome houses at each of the poles, made jacuzzi, and docks.
Game center:[redacted]

Past projects: Done all the achievements for GC 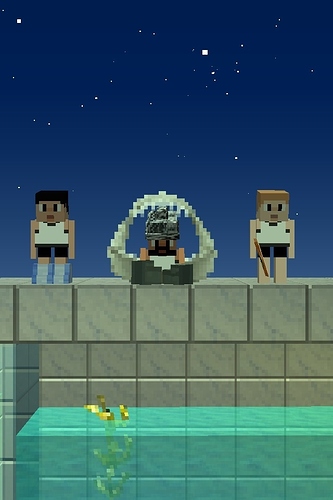 Future Ideas: Making a vertical pipe of water from space to lava and growing kelp in it. Creating basalt by emptying one of my oceans. Creating an ENOURMOUS donkey and dodo farm. Building an underwater house!

Thinking of taking some screenshots of the buildings others have made (donkey stairs, lighthouse, roman aqueduct, etc.) and replicating them in my own world!

Past Projects: Most GC achievements. Made a small donkey and dodo farm. Circumnavigated the world. Reached the centre of the world. Managed to freeze and cook poor Buck several times! 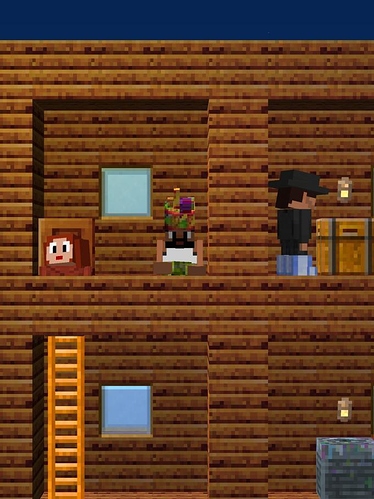 Left to Right: Susan, Bamba, Rhi
Rhi is currently making long trips through the mountain ranges to the mines.
Bamba is meditating in order to reach enlightenment for the 11th time.
Susan is finishing up the castle for Rhi, so that she can have his old house to herself.

bh names greg
what i’m doing now: circumnavagate round the world
future destory pine trees and drop bears mahhaha;)
past fall form space to the earth in the old 1 pod

Names: Vin, Vince, Vincent
Present Project: Finish exploring my huge natural cave system that are all linked across my continent.
Past Project: Circumnavigate world
Future Project: Explore all caves and hopefully be able to transport a shark to my house as a dangerous pet.

Cool ideas I might try those and yes even hidden achievements

Ahhhhhhhh! There should be like weirdos and a better chance of finding gold. This is Josh!!! 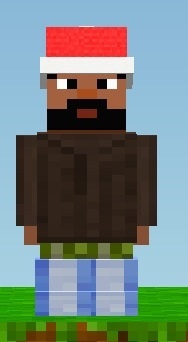 bh name: superman
project: making a golden spade to find coffee, carrot, and chili with.
future project: explore around the center of the earth for tc and make basalt next time i go down there.

Project: Building a small marina and underwater glass viewdeck at the edge of an ocean

Future ideas:
● Dress up in something decent
● Make a Donkey Highway
● Make a Watervator
● Fill chests with produce
● Make a straight shot upward into space with ladders

Past projects:
● Create a fishery out of a small, sandy lake
● Create a decent Hobbit-hole house
● Create a sand-greenhouse, and a compost-greenhouse
● Dig straight down into the center of the earth
● Make it all the way around my current world

Present project: finish renovating my house (over 300 blocks deep into the ground)
Past project: Finding a diamond and all the natural ores/gems
future project: Collecting over 300+ time crystals

-Expansion Plan for the Blockhead Tower, including a new building for farming and fishery.
-To build the new Burj Kalifa tower and Burj Al Arab.

Name:Steve (off minecraft)
Real name: Harrison
Project in progress: Smelt all my ores
Past Project: made house
Future: finish my skys****er and sort chests out.

My mom’s (she’s better than me) BH: Carol
Real Name: Carol
Project in progress: mining
Future project: Build a fancy house made out of gold

BH Names: Caleb, Nicholas (who insists you don’t call him Nick, although Ivan often does), and Ivan. Caleb and Ivan are brothers, and Nicholas is their cousin. They are all young adults, and Nicholas wants a wife.

Projects in Progress: Abandon a Blockhead (Ivan) on an island (that happened to be near the North Pole) with a tinfoil had, and see/record what he does in a thread. Make a Donkey Highway (Nicholas’s project, while he waits for a girl to enter his world). Building a barn, Caleb’s project.

Future/Past Project: Partially drain an ocean and farm basalt.
Future Projects: build a castle, build a sky skrapur, get a diamond pickaxe, make a dock, make a more effective shark farm, make an active and lasting fish farm, get Nicholas to marry someone (his choice!), make a basalt space station, make a Battle Trophy room/building.
Past Projects: build the basic layout of a barn, make an infinite water method machine, mine to lava, make a house out of basalt, acquire all pickaxes (below diamond), warp in 3 blockheads, make a floating farm, acquire red marble, eat all known foods, kill sharks (lots of 'em!), acquire all pole items, circumnavigate the world, be immortal (easy, really: Just make a blockhead!), make a hot-tub… must I go on?

Anyone wanna do a co-op world?