Ok so say there are two BH in a world, one has 2000 tc and the other has 20 the 2000 one can advance way faster then BH with 20 Tc. Also you can craft portals, portal chests, gem pickaxes using TC and other components. You can make new BHs with Time crystals. Oh right you can buy time crystals making the game p2w btw wumbo is unbanned

It is pay-to-win if you don’t have any patience.

I disagree. Firstly, The Blockheads isn’t pay to win as there isn’t anything to “win”. There isn’t a finish line: 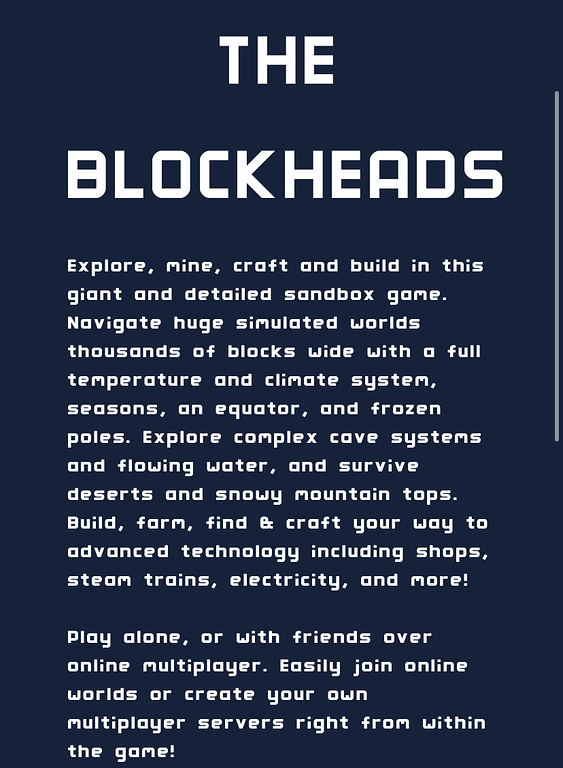 Secondly, true pay to win games have exclusive ingame items, unavailable to those who play for free.
And i truly believe everyone can get these. (from pole items to jetpacks, to tamed unicorns and cave trolls).

The only P2W in Blockheads is double time and multiplayer servers. Though you can play fine without them.

Hmmm in pay to win games you can earn currency by grinding or by taking your mommy’s credit card. In this game say it’s an anarchy server and it just started. People with TC will get the upper hand way faster than the players who just play the game.

As someone who loved playing extremely pay-2-win virtual worlds, I’d say the Blockheads definitely isn’t P2W. Now I don’t know what was wrong with my past self, but I basically hopped from these virtual worlds every time I reached the “F2P” limit (free-to-play). These games locked 70-90% of content behind a paywall, whereas the BHs has all content 100% free except servers. If you count servers as “winning”, then I guess it is, but I agree with JesuisManuel, there isn’t really anything to “win”.

You can get ahead with ads, too, though. My attention span is painfully short so I got out of Skeeve’s City on the first day by abusing the time crystals I saved up lol.

I have been playing since 2013, and in 2013 the game felt more like a singleplayer game to me—as multiplayer became more of a thing, it still never felt P2W. On plenty of servers, too, with server goals. Never really felt like I fell behind and also never paid.
You could argue that time (to watch ads) is what gives me an advantage, but that’s still free.

Pretty much every game has micro transactions that “make the game easier”. That isn’t the definition of pay-2-win. It’s pay-for-convenience here, or pay-to-own-a-server. Pay2Win is when you get a huge advantage over other players in the game by paying—and if you are going to refer to these anarchy servers where someone is king (I have a difficult time imagining the average player accepting any random person as king though lol), then that is a game mode constructed by players using their own creativity and not part of the game itself. It isn’t a “story mode” where you need to pay to become king, it’s just online interaction, playing by the rules set by the owner. There isn’t really any advantage to be had over other players when the main point of this game is being a sandbox game.

The Blockheads, like many games, is “pay-to-save-time” or “pay-to-make-things-easier”. The term P2W is not associated with games with the sort of micro transactions that the BHs has.

Ok so what do you actually win? A meaningless title in one server. That’s not P2W. You can be mod/admin in servers and that’s free for anyone.

Not trying to be harsh, but there isn’t anything actually to win officially , that’s some random bs rule created by one person in one anarchy server.

P2W in your scenario would mean that if you get to be king (which isn’t what the blockheads is about) you get major advantages over other players, by sole paying such as exclusive items and skins with better stats than the original ones. Let’s say a jetpack that flies 2x faster. Or better and exclusive clothes. (That others players don’t have= €€€) You name it.
That doesn’t exist here.

The Blockheads is a sandbox game: is not constrained to achieving specific goals and has a large degree of freedom to explore, interact with, or modify the game environment…

I would describe it best as ”pay to save some time”, rather than ”Pay To Win”.

Well technically items like portal chests and pickaxes are “exclusive” in a way. They require time crystals that you can only obtain like 5 of from mining and from ads. Say you have no internet and you have to grind for hours to get TC. There might not even be enough TC blocks in your world to get a trade portal or portal chest. Without ads this game is pretty much pay to win in a single player world.
Also pay to skip/win definition right here 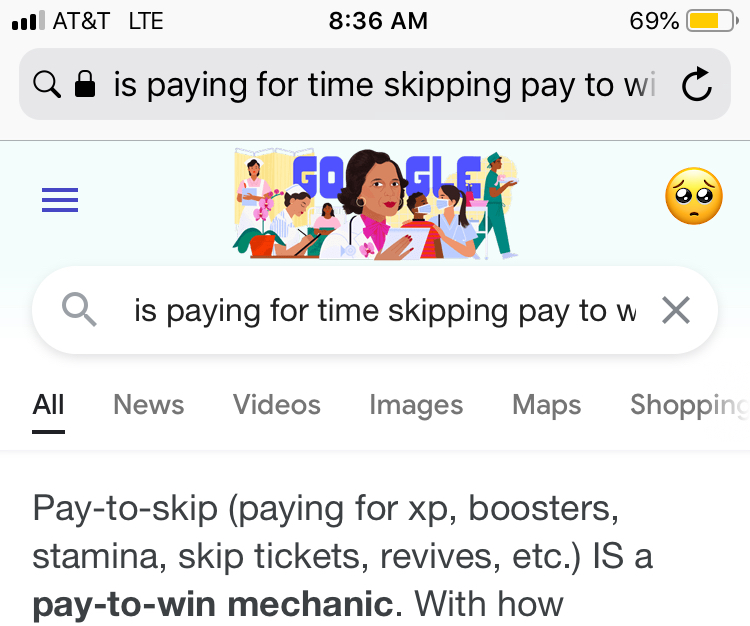 i look at it this way… p2w has multiple layers

of course there are games that have no in app purchases but that’s less common, so you won’t need an explanation

there is then another one after that is slightly more mandatory, it makes the game much more difficult without spending money, but while still possible it may seem too difficult and the player will likely give in

now one that is misleading us the layer after that, those are games that give little to no opportunity to obtain things without paying, even though it’s possible they implement items like special weapons that don’t just help progress but are necessary for progressing, but are hidden as optional

the highest one are games that require money to be spent after installing or buying & installing the game itself, there isn’t a way around it, no gameplay will be able to progress you to the end of the game but may allow you to for a good amount of time

now based off what i said, do you think that the first layer accurately describes blockheads, or the second? i can guarantee it’s not the third or last

it has in app purchases, those being time crystals, double time, and server hosting… are those things 100% necessary to get to the game’s ‘reasonable’ end point? as it has no end point as other people have stating, unlike minecraft that has an official end after beating the ender dragon but does allow you to continue to get more progress while some games have an official end and that’s it

let’s assume the game is complete when you get all craft benches at max level, you’ve encountered all entities etc, bad example but the point is no matter what you didn’t NEED time crystals or anything else to get that gameplay it only benefits you in terms of time, in my opinion, it’s only part of the first layer which one would argue isn’t even p2w at all, it’s more like pay-to-get-closer-to-winning-sooner

keep in mind time crystals are also obtained in other ways, so even the ‘premium’ currency (isn’t really one) doesn’t need money

@ZAIN finally someone gets it!
And spinal that was a really open minded way of looking at it. Personally I believe the blockheads is 100% playable without TC but there are items that are technically exclusive to TC buyers. I think it’s layer number two because TC make the game a hell of a lot more easy without having to spend hours upon hours on end grinding away at the refinery. Plus TC are a required part of the game. You need them to do a lot of major things. Portals and pretty much anything at the portal costs TC. Also lmao is p2w like shrek with layers

Really? Go on multiplayer and ask for a starter.
Chances are you’ll get everything in game.
Portal Chest included.

These are four starters from four different servers: 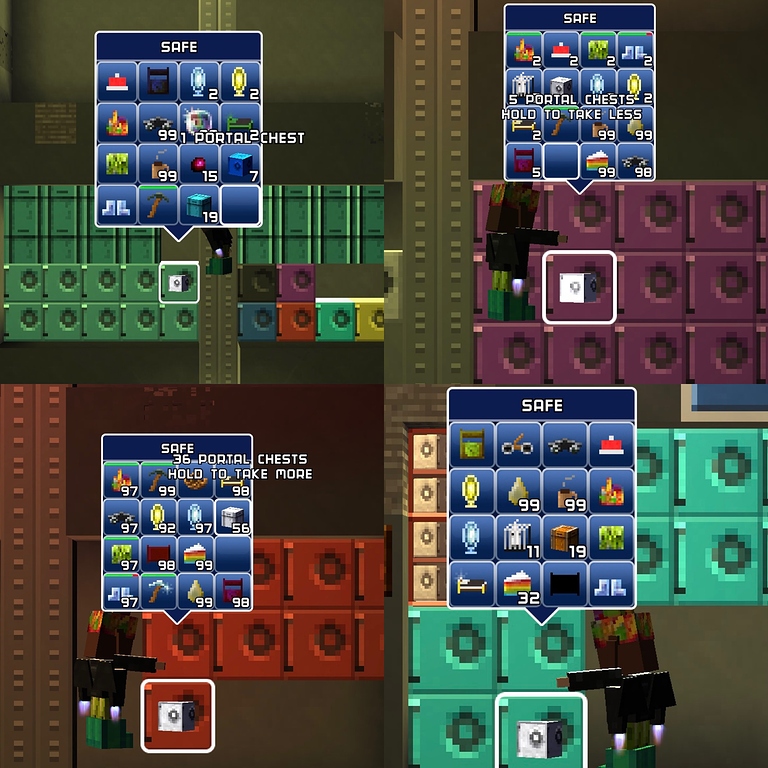 How are things “exclusive” when you can literally download the game and have everything handed to you in 5 minutes? That’s the opposite of exclusive…

Without ads this game is pretty much pay to win

…But you actually have the option of watching ads.
And mine them.
If you had literally no way to earn free time crystals… and you had to spend actual money that’s P2W

These are four starters from four different servers:

Say you can’t watch ads though. Say you have crap internet and can’t go multiplayer. Then you don’t get that portal chest… also what’s the point of a portal chest if you can’t afford the TC to get another one in your single player? None. Mining for TC will get you very bare amounts and not enough for something significant. But use a gem pic! Some will say, those cost time crystals. Ads does not affect the fact that it is pay to win, or since there is no winning goal. Pay to enjoy the game more and not have to grind for hours is a better word. I have nothing against the BH as it was one of my very favorite games when I was younger, and still is. I’m simply stating this game is pay to win.

This is literally today, right now, joined a random world and asked for a starter… 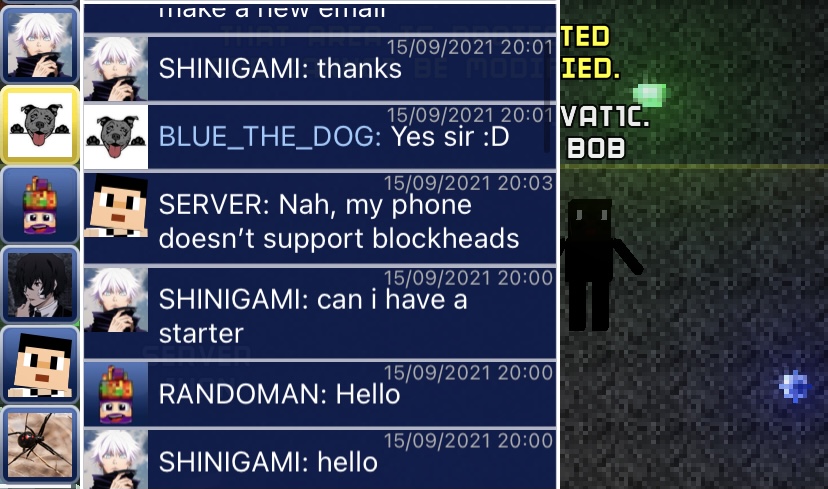 So much exclusivity lol @BeakBoi20

Yeah, i believe in equality and that’s why i share everything that is given to me to other players in Multiplayer, so we can all have fun. I’m not hoarding them lol.

but all four of your pictures appear to be in the same world, seems like an unlikely coincidence but i guess it could be possible

Say you can’t watch ads though. Say you have crap internet and can’t go multiplayer

Well, go to a public starbucks or mcdonalds and get free wifi… play blockheads there if you don’t have wifi