Ummmm Guys we just had a new update 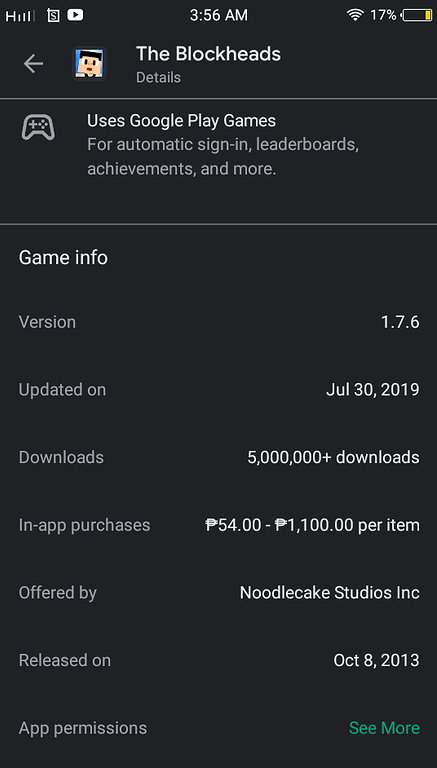 Ummmm Guys we just had a new update

Almost a year ago.

i know for a fact that they stoped developing the game

The coder working on Blockheads at Noodlecake has let me know that there is an update ready to go, but which is being held up by Google due to technicalities. Where did your “fact” come from?

update ready to go, but which is being held up by Google due to technicalities.

The problem is, will Google do anything though?

there is an update ready to

YES! I’ve been waiting so long!

I don’t know that. I don’t know how long it will be though. It’s years since I dealt with Google publication issues. They were pretty slow when I did though. If you want updates on this the best thing to do is to contact Noodlecake at intervals to get the latest.

That understanding isn’t entirely incorrect. The game is unlikely to get any new feature updates, Dave’s moved on to making an entirely new game. Dave doesn’t create the Android port, he creates the iOS version, then gives the code to another company so they can make it compatible with Android. This conversion company is Noodlecake. Not sure as to what the update entails, but it’s probably more Android-specific bug fixes as opposed to a feature update. Thusly, the update will not be reflected in the iOS release. Probably.

You nailed it, @Testif

@applesandkiwis: Bug fixes are a possibility. There is just such an update for Android that can’t be released right now. This isn’t the same thing as a content (“major”) update, which is an unlikely contingency at this point.

No, Google is withholding the update on technical grounds, and only they can give it the nod.

Google is withholding the update on technical grounds, and only they can give it the nod.

Again, that sounds a bit concerning.

The problem is, will Google do anything though?

Are you asking me that question? Totally the wrong person to ask

You will need to contact Noodlecake about the Android side of things. I have limited hours in which to get a lot done, and don’t choose to take on their support for them, on top of my own.

If it’s the Google I know they will not grant exceptions easily.

I know they will not grant exceptions easily.

Yeah, I highly doubt that Google would be willing to make exceptions for Noodlecake.

That is my take on the whole situation.

Noodlecake eventually gives up waiting and complies with Google’s requirements

I’m rather uneducated here, what does noodlecake have to wait for instead of having to comply with googles requirements?

what does noodlecake have to wait for instead of having to comply with googles requirements?

They’re trying to wait for Google to give their app an exclusive exception.

The requirements likely have to do with the target Android app API - as this is raised every year to the latest API version. The latest Blockheads update as of now targets Android Oreo (8.1) and by the end of this year it is likely that all app updates will require the app to target Android 10 (right now the requirement is Android Pie (9)).

But that doesn’t take long, specially if you are a recognized developer.

that doesn’t take long, specially if you are a recognized developer.

How would you know? If that is the case, I guess Noodlecake isn’t a “recognized developer” or anything like that.