Looking forward to see more about the development of this! 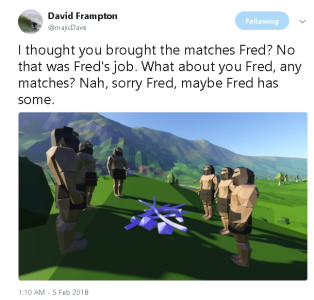 so will the world credit be free or something to make it free?

Please see/read the following topic to have this conversation, if you mean blockheads: A change to server credit in 1.7

Will this game be filled with Majic…

Answer:
Sort of. Hectopascals will make their own servers. There will be no official MajicJungle one

Is this game could be multiplayer and theres like a server u can join? And you can build anything in this game? Lastly is the game 3D!?

The game will be both single player and multiplayer, you can build and write mods for it. It will also support VR (3D):

From the Ambience Forums:

It will allow both single player and multiplayer.

Initially, there will be no world hosting by Majic Jungle. But I am thinking of doing a server listing system. So people might be able to set up their own multiplayer servers on their own hardware, check a box to make them public, and then in the game you might have a list of all public servers that you could join.

I don’t plan on allowing you to actually fly around at super speeds like I am in the videos. Exploration will be a big part of the game, and your ability to travel vast distances will be limited, especially in the early game. You can explore distant mountains, and beyond, and eventually cross oceans and circumnavigate but you will have to work to get there.

As I’m definitely making it very easy to write powerful mods for Ambience, you can pretty much guarantee that even if I don’t make a creative mode, somebody else will, and there’s not much I can do about that even if I wanted to!

So much like Blockheads, if you like the challenge of playing the vanilla game that’s great, but there will be options for playing in many other ways too.

The game does anything a modder programs it to.

Ohh. Okay is there a conversation too like chat from Ambience?

As far as I understand it will be still a long time before the game will be released. Long as in years, not months. Going by Dave’s tweets he has only just managed to have his cavemen lit a campfire. So I guess it is way too early to ask for details.

Please don’t tag Dave for no reason, and I think everyone knows what Ambience is from reading the thread.

As Brer Rabbit said, please only tag David if he really needs to see your post. Tag me if it’s marginal. We want Dave to work of his games, not on us!

It looked like Dave is keeping the app logo the same in the photo showing that he submitted it to Apple for review.

I asked milla about this about half a year ago. She said it was. I have no idea when though as it has been a long time now.

Woah. GUYYSYYS!!! DAVE IS WORKING ON A GAME OTHER THAN AMBIENCE HE SAID SO HIMSELF!!! 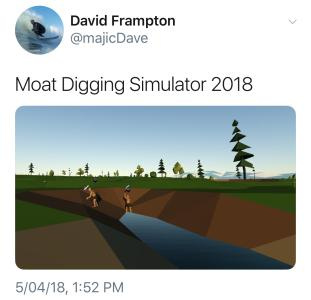