How Hard is it to make a railroad? All the time and effort just for one rail! Well I thought with my friends that there should be a railroad rule when you create worlds. Click the button and your whole world has a railroad raped around it!

Would there be tunnels through mountains?

I think doing the railroads are pretty fun. I don’t ever see that coming into the game though.

The point of blockheads is to spend time and play.

Many servers have unique features with their subway. (Skeeve’s gigantic Empire has a working rail throughout the entire 16x world.)

I don’t think we should change railways. It’s hard work, so normals can do it in order to receive a staff role.

I was thinking that the suggestion could be in a custom rules world and then there could be an additional introduced background block (like benches) implemented in a normal rules world that could instantly lay down a length of rail and additionally break blocks along the said path. Maybe say like a maximum of 99 blocks range in the allocated direction while placing a shovel + pickaxe in their individual slots as required tools to break their respective block types? It would work similarly to other benches where the type of tools used will determine the duration of the operation, and that the progress would be visible as the bench is being used. The limitation to this bench would be the explored area, meaning that as far as you’ve explored is only as far as you could build to. 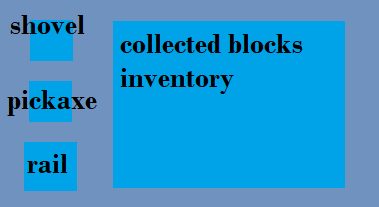