I rarely visit the forums, and I’ve recently gotten back into the game after buying an iPad Pro (The Blockheads probably slightly contributed to why I bought one), and I’d wanted to ask after seeing my old servers

What were your favourite memories that you’ve spent in The Blockheads, more specifically the times you fondly remember looking back in the past (and probably sometimes wish they were still there to experience)

My personal favourite memories were during the mass cloud boom, when I met a few friends on the blockheads, namely Mage111 was the friend I spent the most time with in this game, before he disappeared one day I think in 2016. I loved playing the game with friends while exploring or just chatting up with them during school nights where I wasn’t supposed to stay up past 9 PM but I ended up staying until 1 in the morning (what a good student I must’ve been haha).

I especially remember running a server named Ultra Woods from late 2014, when you used to scrape together time crystals ad after ad just to start your own server and hope someone would be charitable and donate to you lol
I think this server ran up until 2016 or 2017, where I reinstalled the game and I lost the server forever.
This server was the one I remember as the turning point to me taking multiplayer as the best aspect of a game, as I shared many memories of making friends and sharing the game with others at my school, while exploring the world and trying to build (unreasonably) large rail systems or buildings.

I don’t exactly have a picture of Ultra Woods during its prime, as that was so long ago and my iPad Mini was a 16 GB one, so I never kept any photos (and I still don’t to this day on my 256 GB iPad Pro, guess it’s just a habit) so you can have this picture of its successor in spirit’s spawn, Lunimoor Woods (which is likely permanently closed unless I figure out how to link an Android ID from a phone that doesn’t work to my iOS ID) 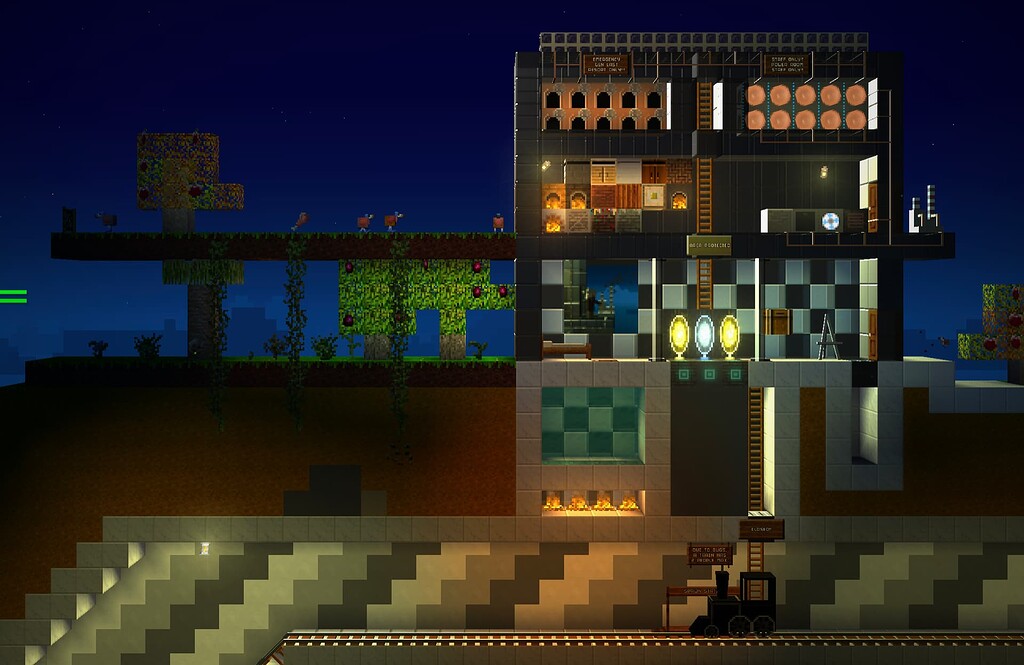 I remember getting admin on a server when I was 9 and just flying around looking at people’s bases because you could see the whole map. in hindsight, whoever gave admin to a 9 year old was probably stupid or something, thankfully I didnt do anything too bad

to be fair, I started Ultra Woods when I was 9 lolo

Man, the old days on Blockheads when there were those faction servers and you’d join clans and fight wars with others for the little bits of titanium. Good times. I miss the old community.

crash hackers mainly have those profile pics, and yes 9 year olds are not nearly as tolerable, but there are people that age right now

Your description of 9 year olds is accurate for the most part (and well, we can’t stop parents from letting their children run amok on the internet so it happens), but I did know one nine year old who was more mature than many adults. She must be fifteen or something now. I remember playing with her on a lot of servers–don’t mind me, just reminiscing with the spirit of this thread lol.

reminiscing is what this is so great work on that, anyone remember when cloud servers weren’t a thing? i remember those times fondly