So you want a unicorn? 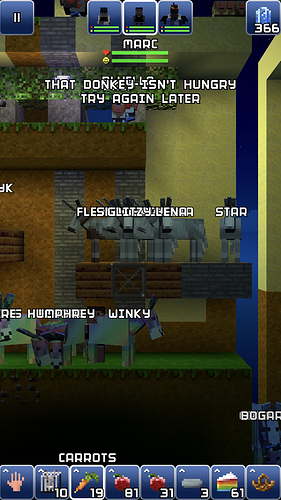 Greetings! With 1.7 came unicorns,the new rare creature that will probably become dirt cheap after a week.

Getting a unicorn is a lengthy process,but achievable in about 6~10 hours of gameplay.

Below is how to get them.

1.Get a carrot farm. Optional,but useful if you have one. You’ll need carrots to tame the donkeys.

2.Keep in mind that donkeys don’t give birth that quickly. This means that it’s possible for you lose all progress because that last donkey died. Tame them asap!

4.Donkeys only eat once per day. It’s possible for them to die of old age before you even get to tame them.
Keep track of how much you fed them,and if you get a donkey color you already have,try to cage them so you don’t lose all progress if they die.

5.Make the rainbow cakes before you get a unicorn! If you fail,your unicorn might simply die in your face before you even get to feed them. Cage them from the moment they’re born if you can’t afford rainbow cakes.

That’s all I have. I kinda wanted to keep number 6 to myself,but decided unicorns are gonna be dirt cheap soon,I might as well spill the beans.
Have fun!

Nice guide, but a couple of things. There are also purple donkeys and you can feed donkeys more than once a day.

Can you make unicorns in servers that aren’t vanilla?

Can you feed donkeys rainbow essence of cupcakes to breed unicorns?

Can you make unicorns in servers that aren’t vanilla?

Rainbow unicorns can, the others can only double jump.

Can you feed donkeys rainbow essence of cupcakes to breed unicorns?

Donkeys eat carrots, you have to go through a bunch of donkey colors before getting unicorns.

Only rainbow unicorns can fly.

Someone told me there was unicorns? Is this true? Also where do you find them?

Where do you get one?

Some people have said unicorn bushes, but I’m not too sure.

Start by breeding donkeys and work through their progression and then there will be unicorns and another progression before the final evolution of a rainbow unicorn.

Then what exactly are rainbow cakes for?

What does unicorn eat to satisfy their hunger or to be tamed?

Rainbow cakes are for feeding your unicorns. They get hungry and/or hurt. It is like when a blockhead gets hurt he eats and his health generates.

That’s a lot of material then

Unicorns are fun to feed, idk why. I love rainbow essence though, I already found 118 in golden chests :smiley

Where can i find unicorns?

You can only get them via breeding of donkeys