Stop locomotives from going off rails?

Is there something that can be built beside a train station (where the track ends) that will prevent a locomotive from popping off the track?

For example, if you’re in a locomotive at the station, the rail goes off to the left. But if you drive right (where there isn’t rail), the locomotive pops off the rail and floats.

I’m wondering if there’s something I can do or build beside the station/rail to prevent this and keep the locomotives on the rail. Thanks!

Are you talking about how passenger carts often break easily when they’re on a bumpy rail?

No, though I wonder about that too…

From the station, there is no track to the right, but if someone drives a locomotive right anyway, it pops off. This is on an online world, so we admin find ourselves constantly picking up locos and replacing them on the track. I’m looking for a way to stop the ability to drive off the rail, if it is possible. Does that make sense?

I’m not sure that I’m completely understanding your problem, but I’ve found that steep inclines and narrow tunnels have caused issues for me. Locomotives work best on long, straight stretches with tunnels at least a height of 3 to make sure they don’t bump the ceiling. The best incline that I’ve found works for locomotives is 3 blocks, then an increase of 1. Hope that helps

No, not that either LOL—Sorry, here’s a screenshot. Players are meant to ride left from the station, but some prefer riding right in order to cause frustration for others LOL. I want to know if there is a special track configuration, or a barrier that I can build on the right side of this station that will not allow the train to pop off of the rail at all. So far, it seems like a regular “wall” doesn’t prevent the train from popping off, nor does extending the rail right a few blocks. Does this make more sense? (Thanks again!)

Edit: OR… is it possible to build a rail in an infinite loop? (Besides going around the world.) As in, a rail that would essentially turn the train around at the ends?

Hmm, it doesn’t break for me. I’m not sure what’s going on with your case. Maybe do /repair around all the spaces on the station?

But if you get out of the loco, get back in, and go right, then it will pop off the track, right?

Yeah. If you want to continue going right, you’ll need to extend the track, and the locomotive should still stop at the end without breaking.

You can’t go right when there isn’t any track to drive on.

What Mattrick is saying is that when the train is already at the end of the track (that he doesn’t want to extend), players can still command the train to go in that direction and it will break or drive off the edge if there are no blocks there.

I did just have an idea after chatting with Mattrick earlier. What if right after the terminus station, you elevated the track with columns 3-4 blocks in the air so and THEN end the rails. so the train will stop there and the players will have to exit the train, dropping a few blocks to the ground, but then not be able to reach the train again (without flight). Trains might still collect up there but at least they won’t break and spin until despawning.

@Mattrick Here’s an example of what I mean. The train on the left is stuck without flight. 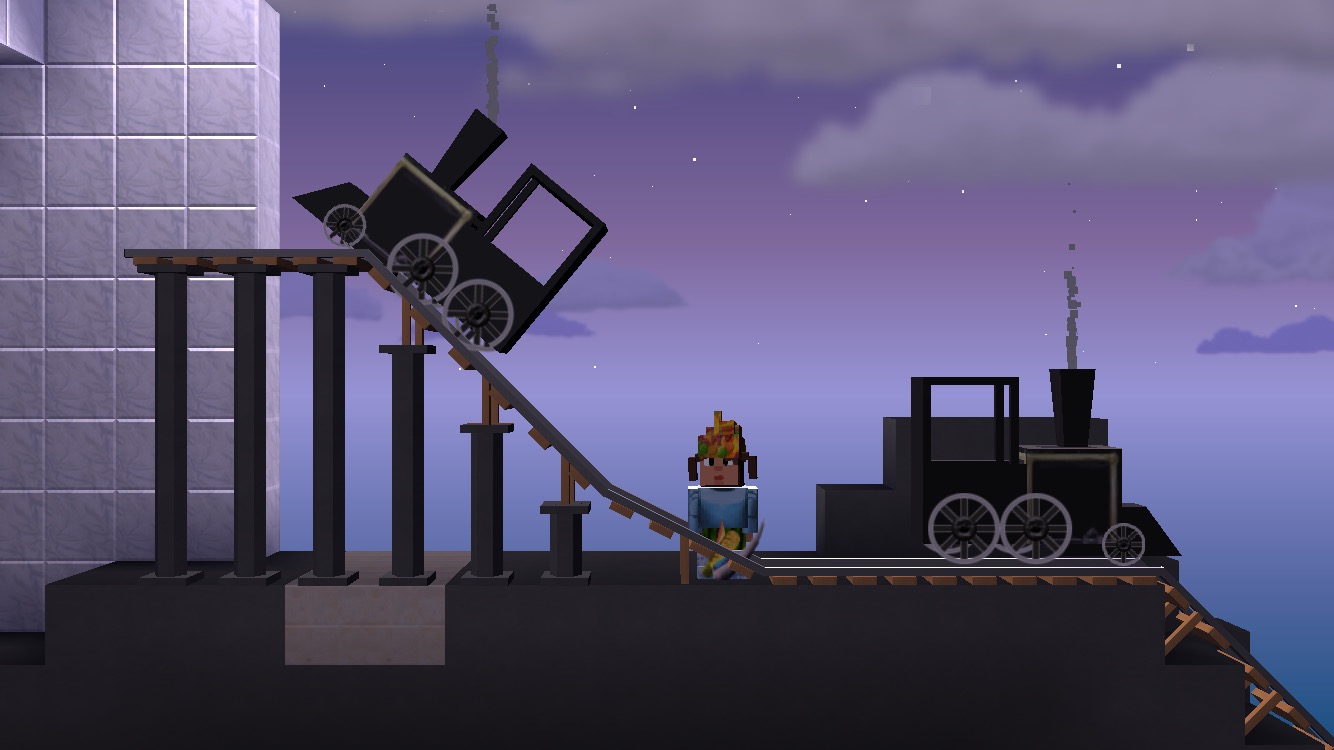 That’s better than having dorks run the trains off the tracks, breaking it, making them unusable anyway. Admins will probably have jetpacks and can move the trains back down to the station area.