I was going to post this in the Iridescia server thread, but my screen is smaller than I originally thought and I ended up taking more photos than I should.

Anyway, I built on that server, some wintery Christmas stuff: 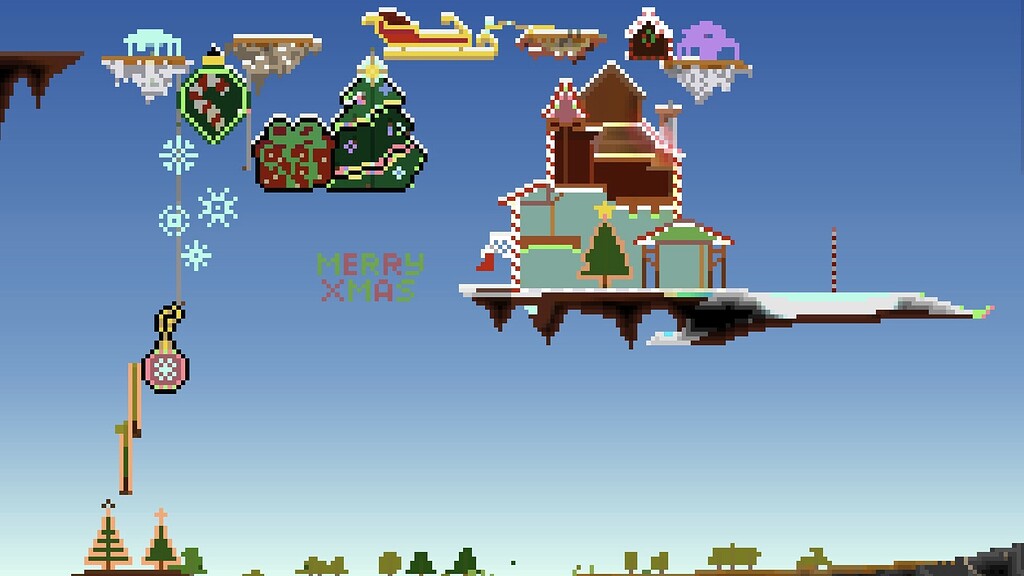 The North Pole is glitchy in the world of The Blockheads, so I had to transport it into the sky not far from spawn instead, and vaguely in the direction of the north.
Now the snow sort of ruins (and sort of enhances IMO, depending) a few parts, so I took some closeups. And I shall be dumping them here:

Happy Christmas Have Yourselves a Merry Little Christmas, everyone, I had fun building this and I think it turned out okay. I also derive an unreasonable amount of entertainment out of the “chimney”.

The pixel art looks amazing! Do you plan on making more?

. Great pixel art btw can you make a candy cane?

Hey, I like the gem trees!
Ty, and there’s one in the green Christmas bauble/ornament–unless you mean irl? Then I’ve never made a candy cane, but I’d be open to trying.

@WumboJumbo Thanks! And maybe? Probably sticking to simple ones like these in-game. I’ve drawn somewhat less “simple”/easy ones (but not in the BHs) before, but they’re quite time consuming–and turn out really messy–since I’m not good at it yet, and placing blocks would make them take even longer. I have to be in the mood for it.