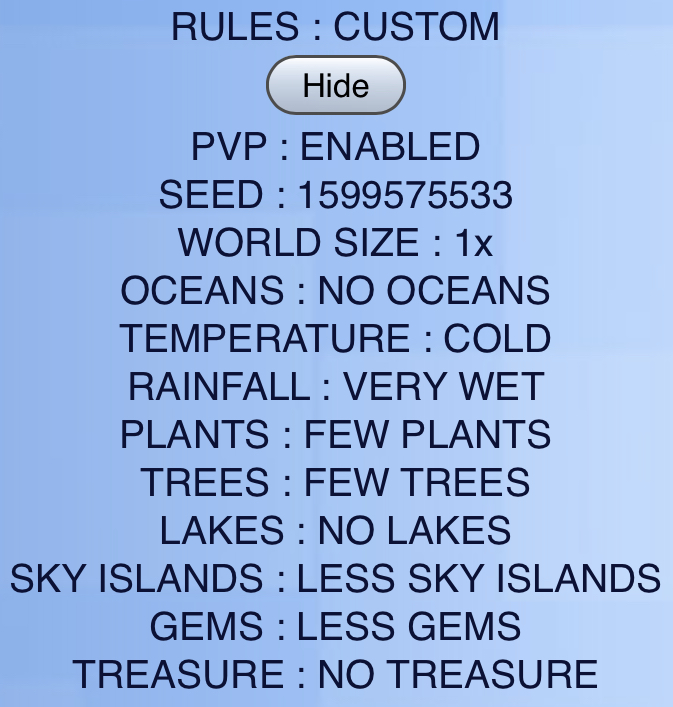 It is 2089, Earth. The world has turned into a wasteland due to arsenic bombing. Whats left of the government has fled underground. Your only goal is to build, craft, and survive.

Forming clans is a good idea. To have an official clan, you need at least two people, and a base. Moderators are needed! Apply here:

What’s left of the government has fled underground.

Can you find what is left of the government if you explore underground?

Would you mind explaining this to me, please? I’ve never heard of it.

It’s basically just leaving In the middle of combat.

Logging out of an online game to avoid combat/death. This cowardly tactic often denies the opponent some victory or loot they may have earned for your possible death. This tactic is often used by weaker outfitted or less experienced players.

The initial server release date may be pushed back due to an error on the Mac server website.

For the server, would you rather have

Keep in mind, each wipe will have a new seed.

The server should be releasing on September 10th, since the problem has been solved.

Ooh yay on my birthday! Maybe I’ll pop in for a bit

Ooh yay on my birthday!

One of the reasons lol

The poll will close in 2 days, don’t forget to vote!

D. A wipe every century

A wipe is when all progress is gone. (All data will be wiped)

Sorry for such short notice, but the server release has been pushed back to September 11th. I needed to add something to the server.

@Codeoffun, please explain what option D is. You asked a question.

the server release has been pushed back to September 11th.

I should’ve stated that I needed to set something up for the server. I’ll edit the post.