What are Flax Mats?

So I’ve heard about these weird hacked items called “Flax Mats” that are seemingly invisible and can only be removed with ember. But my question is, how exactly do you obtain them and what do they really do?

You can’t obtain them. They are hacked blocks that were considered being added to the game but they did not. They are now just invisible blocks

They don’t do much of anything.

Hmm so are they world-generated by the hacker?

What is yellow flax mat? Questions

when i go to some server,i see some people give me yellow flax mat what is it?

just about every item in the game uses an id for every item, and the way hackers would spawn them in would be to force an item id into their portal chest or inventory, which results in all inventory slots with an item populating them to get replaced with the forced id. im pretty sure it still works today, but im certain it was patched for items like flax mats, which im happy about since they’re a pain to get rid of

just some old stuff i remember from a few years back

edit: i know some things related to hacking arent allowed on the forums, so feel free to take this comment down if needed

they used to be obtained through jailbroken tweaks by adding their said item ID to the player’s inventory, but like many items as of 1.7 it’s no longer possible through the same methods

originally woven flax mats were completely invisible blocks that did serve as physical tiles you can’t pass through like normal, when you tap on it with your hand or a pickaxe it’ll just show up as if you were trying to move there

they’re really annoying, the only way to have gotten rid of them is by burning them with embers, their item texture was just a plain dark grey like block, one which when placed can’t be picked back up and basically has no other use

Dave left items he created and then discarded in the game. Those with the know-how can access them.

It isn’t permitted to ask how to get them, or to tell anyone how to do so in this channel, or any of our official channels.

i could’ve sworn there was something about them being fully removed, i could be off base here so tell me if i am, but it was said he removed a heap of items like that completely for obvious reasons

Probably. I’ve lost track of stuff that I don’t hit in regular play. The line between the to-dos Dave and I talk over and the final outcome on each update is seriously blurry in my memory.

It looks like these woven flex mats don’t do anything when placed anymore, nothing related to the behavior of an invisible block. You can place them… it’s basically just placing normal air and you can still interact with the area as normal. 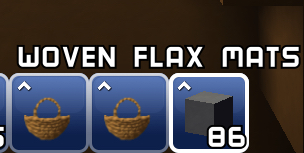 I stored a few hacked objects in an underground area long ago to avoid taking non-legit items mixed with other things, thanks for reminding me I had these to remember my NOOB moments
, thinking these were real blocks LOL

i could’ve sworn there was something about them being fully removed,

If I remember correctly, I’ve seen flax mats that were placed before 1.7 that were still there afterwards.

It looks like these woven flex mats don’t do anything when placed anymore,

Maybe they will stay if placed before 1.7 but disappear if you place them after 1.7.

suppose that’s possible, i only know certain items aren’t obtainable at all anymore, i just don’t know which