There hasn’t been a new major release of Windows in more than half a decade. That’s about to change.

Microsoft will unveil 'the next generation of Windows' on June 24

Microsoft has announced an event taking place on June 24 where it will unveil the next generation of Windows. The event will be online, and begin at 11AM Eastern Time. The company is expected to unveil a new user interface and feature set for...

That’s about to change.

Windows 10 is outdated in certain aspects.

This is the version which will usher in world domination of AI.

What do you mean?

Windows 11: Release date, price, download, and everything you need to know

Has Microsoft already teased the next name for Windows?

Microsoft will hold an event to announce the "next generation of Windows" later this month, and some think Microsoft has already teased its official name.

Everything we know about Windows' big Sun Valley release so far

Microsoft is currently working on a major update for Windows 10 that is expected to debut later this year that will bring with it a refreshed design and new features that are supposed to enhance the users' workflow in 2021 and beyond. This will be...

This is going to come across as a typical “I use arch BTW” reply, but it’s genuinely not meant like that.

What’s it like to do a major windows update? Between versions, I mean. In Linux, Debian at least and it’s derivatives like ubuntu, you can edit a file to tell it to use the next version and tell it to update and it does. Everything remains as it is, all your stuff stays as it is. I’ve even been able to continue what I’m doing during it. In arch Linux there’s even less hassle, you just tell it to update. It’s continually updating, various parts of it will update one day, other bits another day. You just tell it to get the new software versions and then to install them. Often a restart isn’t needed.

What does windows do? Is it a big event, like it goes to a special updating screen and has a progress bar? Does it download lots while you are still using it and then install it all when it’s all ready? Does it keep asking questions or does it ask stuff at the beginning?

And all the things you have installed, are they still there in the start menu? And all your stuff (downloads and documents, saved games), do they stay where they are?

Many people hated Windows 8 and have wanted Microsoft to overhaul Windows for many years now.

Nah 7 is good
XP too

wanted Microsoft to overhaul Windows for many years now.

bill gates… that SoB took so long to release another one, come onnnn

How can you be so sure about that?

Windows 11 has officially been leaked. A build of Microsoft's upcoming next version of Windows, now confirmed to be Windows 11, has leaked onto the web just days before the company is expected to unveil the next generation of Windows at a dedicated event. The leak has confirmed that the...

We have the first glimpse of Windows 11. What do you think?

A build of Windows 11 just leaked online. Now that we have a glimpse of the new operating system, we want to know if you like the look of it. Windows 11: Wasn't Windows 10 supposed to be the last version of Windows?

The leaked build of Windows 11 confirms that the next version of Windows isn't named Windows 10. Doesn't that go against what Microsoft has said for years? Here's our speculation about the upcoming name change.

Here is a recap of everything that was announced at the event.

The tech giant is making Windows 11 work with as many apps and devices as possible, including Xbox technology, Android apps and more.

Windows 11 will be able to run Android apps.

Microsoft today held an event where it unveiled Windows 11, the next generation of Windows with a new design, new versatility capabilities, gaming...

Microsoft CEO Would 'Welcome' Apple to Bring iMessage to Windows

Following his company's reveal of Windows 11, Microsoft CEO Satya Nadella sat down with The Wall Street Journal's Joanna Stern to discuss the...

So far… I guess I got lucky because my laptop is in 8th Gen intel Core i5 and TPM 2.0
Sad meme for those dont have the requirements:
An 8th gen intel or first gen zen chipset from AMD
TPM 2.0 (or 1.2 I guess) 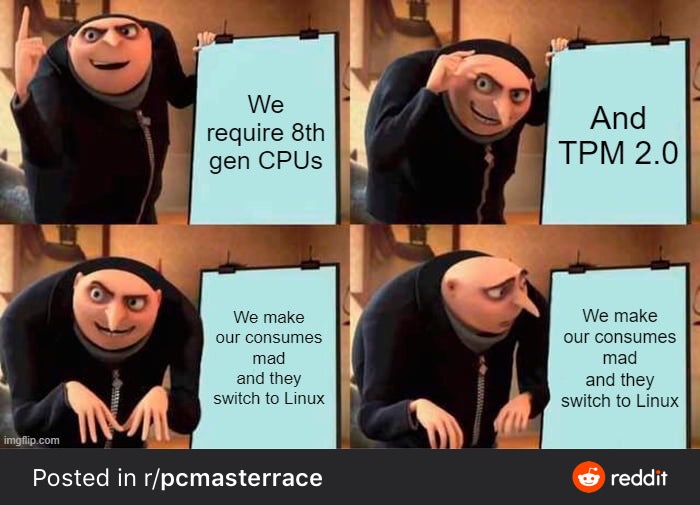