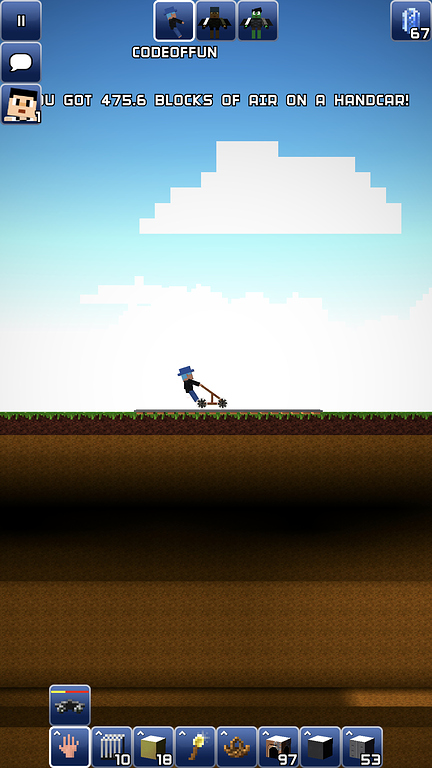 Lol
Oh no this is not the world Record
Record: Official Rail Handcar Distance World Record

There is a record higher than that (I think). @jemnidad knows more than me when it comes to that stuff.

Nope, that 1336 is the highest I’ve ever seen. I haven’t tested it on a 1/16 size world to see if that makes the difference in space to lava height, but I’m guessing it might.

how?! the best I got was only 950~ blocks and that was like in space

I know someone who got higher than that, they don’t really play much anymore though

My highest was 981 I think. The distance from space to magma varies because as you can see from caving, magma will sometimes be higher or lower in different places. I tried to find a place where it was lower and build my jump there. I suspect that on a 1/16 world, there might be even more variation (the way the mountains are taller and steeper), and that Steve guy found an exceptionally good spot. Only Dave could say for sure, or maybe @Bibliophile.

That Steve guy didn’t necessarily find an exceptionally good spot… unless you count the North Pole.

All blockheads worlds, regardless of their width, have a fixed height of 1024 blocks. (That’s a hard coded size, I wanted to change it to make a crazy world…) The bottom 30-60 blocks or so of this is lava, so any blocks above 1024-X must be gained by horizontal movement. However, horizontal movement slows to a near standstill fairly quickly… I’m not sure exactly how quickly, it’s been a long time since I did those experiments, but I’m almost certain it’s far quicker than the 300 blocks claimed by Steve.

As for the lava variation being greater on small worlds, it happens faster, but I’m not sure if that translates to greater height variation.

In his zoomed out view his path shows a very similar course to my record of 981. So our horizontal shift ought to be about the same. I hit top speed before the jump and then keep it tilting in the same direction. I think you might be right about the pole. You can make out the equators in the picture, I think but I can’t tell where the north pole might be. But if it’s a 950ish jump already, how much might the pole add on a 1/16 world? A LOT more than 380 blocks I’m guessing.

I hadn’t seen his zoomed out pic, so I was half wrong

thankfully nobody took me up on my bet…

Let’s look at some back of the hand numbers, just to show something fishy is going on.

Using GIMP’s measure tool and his useful claim that the initial platform was, 50 blocks, we can determine that 50 blocks = 78 pixels or there are 1.56 pixels in a block.

Now, cutting out the center of the image so that we can more easily look at the distance: 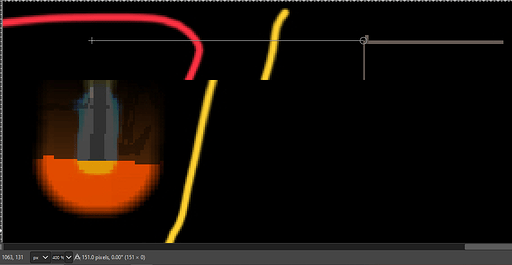 Rather than using the measure tool, I’ll just make note of the Y coordinates in the image for the vertical distance. The top of the ramp is at Y=19 (counting down) at Y = 1459. This works out to about 924 blocks.

This means the jump was 929 blocks if it was a straight line from launch to finish. Now, of course this isn’t accurate… the handcart makes an arc, but it gives the problem some perspective. Where is the extra 400 blocks coming from?

Hypothesis: The way BH calculates jumps is just the distance formula where x and y are world coordinates, from the point the handcart leaves the tracks to when it lands. I’ll bet that Dave doesn’t track the distance traveled in the parabola at all.

For this to work, we need to figure out the coordinates of the starting and ending point.

1/16th worlds are 1024 blocks wide. (0, 0) is the lowest block directly under the North Pole. There’s a suspiciously red looking pole partway up the mountain that I think is the North Pole. It is at X = 1160 pixels. 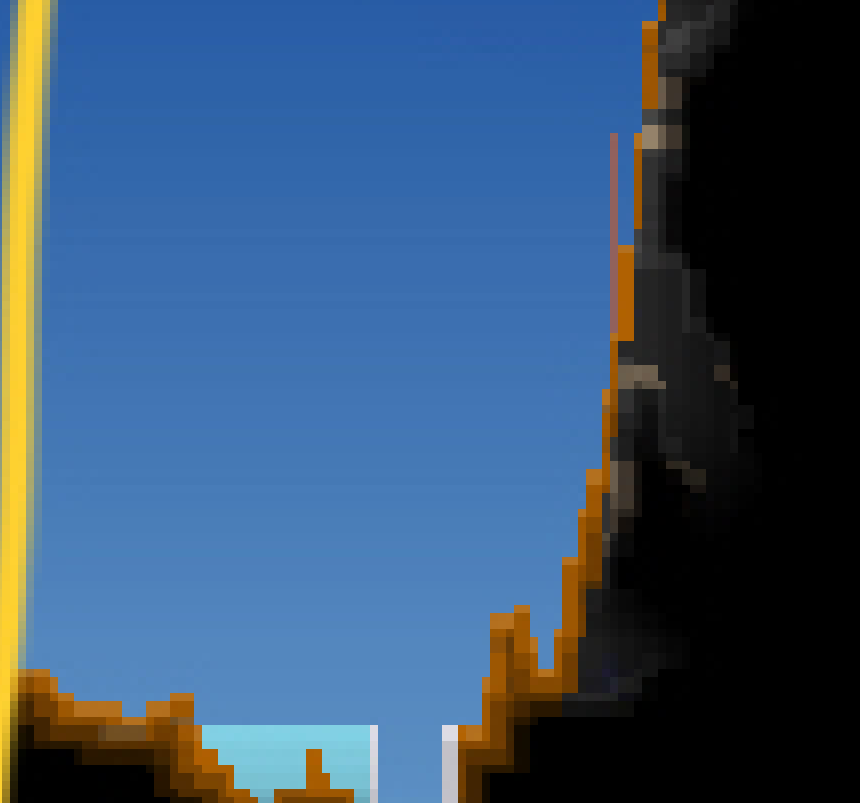 Hmmm… look familiar? This is a bit high, which indicates something is wrong somewhere… It takes a difference of like 40 blocks to bring this estimate to the expected number. This error is probably in the conversion factor. Using 0.6 instead of 0.64 brings the calculated jump size to 1325 blocks.

The numbers in this calculation can’t really be more accurate. The picture isn’t zoomed out to give a consistent block width, if you look underneath the portal, the portal base is 2 pixels wide, but other blocks like the marble(?) holding back the ice at the drop chute are only a single pixel wide.

holy cow, some of the people on forums are geniuses.

usually in ‘competitions’ or scoring systems like this, it helps to have data, most people will be willing to take the word because you have evidence to suggest yours is in fact the highest

this is difficult, considering the Guinness book of world records can simply be off any source you can look at, it takes a long time, but consider the fact you’d have to accommodate for all players on all singleplayer or multiplayer worlds

i can believe that yours is the highest myself, but people can certainly come up with new and clever (and fair) ways to beat various things, and you honestly don’t know until you go a distance to find out

this is just a regular conversation, not a political debate or something, so this won’t be too in depth, but it is on you to provide evidence to your claim, of course

however, the burden of proof says that if someone wants to claim this is false with evidence, they can, but if your only evidence is that people can’t prove you wrong, it’s a fallacy (despite the hilarious memes of that)

in this case if you were to say yours is the highest on this narrow record of this forum and claim nobody can prove you wrong with this amount, technically your score isn’t the highest until you can establish with your own evidence that nobody else has one higher (or at least a reasonable amount of people don’t in this case)

i don’t mean to make this complicated, but the burden of proof is actually an important thing to know about in life, and i feel like it’d be in your best interest to take some steps towards this

Nothing can really be considered a record without the presence of reputable players to verify your achievement. The best way to actually set a record would be to do so on one of this community’s worlds while a few of our veteran players and/or beta testers are on. Players like Bibliophile, asyc, Porky, or Jemnidad could act as our version of the Guiness verifiers.

Note that is not an exhaustive list, and I am happy to vouch for players I have got to know over the years, if you do want to set an official record. Of course, if I’m around at the time, I can also verify records. The trouble is I’m around a lot less now the game has quieted down.

Ooooh, then maybe my record still stands, since it was not only witnessed, it has been replicated by others on Skylands Arena. I actually turned it into a quest on the server.

Nothing can really be considered a record without the presence of reputable players to verify your achievement.

Why not? I mean, they provided a screenshot. Unless they’re a photoshop genius like me ahem-

speaking of world records, i’m pretty sure that this is what photoshop genius is 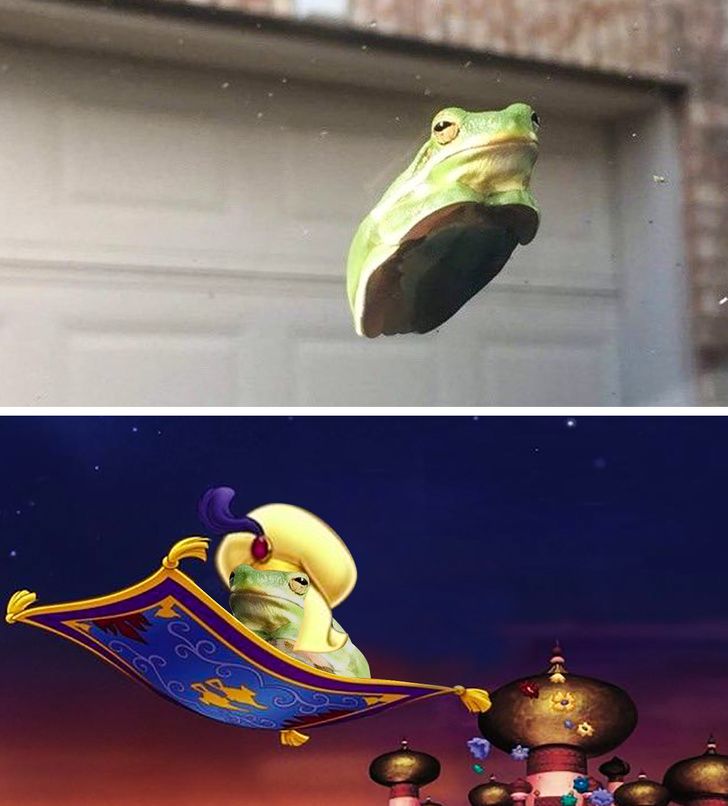 You don’t have to be a photochopping genius to fake a jump.